Rails with Trails, A Proven Idea

Transit opponents falsely claim a transit line alongside the CCT will be unsafe and will "devastate" the trail. Here are the facts:

More than 200 trails have been built or are under development alongside or within the right-of-way of active rail lines. They total over 2000 miles of trail. These trails have proven to be very safe.

The Rails-to-Trails Conservancy has announced in their RTC TrailBlog that they have completed a new report, "California Rails-with-Trails". The study examines the safety of 21 trails that share corridors with active rail lines. This study adds yet more evidence trails that share a corridor with trains can have better safety than trails along or crossing roadways.

From the RTC study:

"The good news is that rails-with-trails have been shown to be just as safe as other trails. Every day, thousands of people across the United States safely use existing rails-with-trails. Fears that more trail users would be severely injured due to the proximity of moving trains have never been realized."

"Rails-with-trails can be safer than trails next to roads. 'In the last 15 years, more than 76,000 Americans have been killed while crossing or walking along a street in their community,' according to the 2009 Dangerous by Design report by Transportation for America and the Surface Transportation Policy Partnership. Trails separated from roads can provide a safer option. Even with an active rail line near the trail, the exposure from a track carrying ten to twenty trains per day is much less than a road carrying thousands of vehicles per day."

Among the 21 trails surveyed in this most recent report:

Two earlier studies show very similar results as the new RTC study. One study by RTC in year 2000 examined the safety experience with 61 rails with trails nationwide. Another study by the U.S. Department of Transportation in year 2002 examined lessons learned from case studies of 21 rails with trails. Both studies are available at the RTC Plan, Design, Build: rail-with-trail webpage. 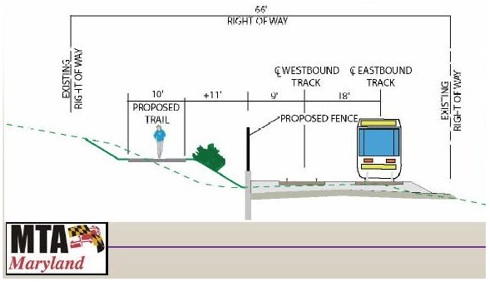 Locally, much of the Metropolitan Branch Trail is being constructed alongside the CSX/Metrorail Red Line corridor route between Silver Spring and downtown Washington DC. Completed sections are enjoyed by hikers, bikers and others in Takoma Park and Brookland. Completion of the project is a priority of Washington DC, as well as Montgomery County, Maryland. See: Metropolitan Branch Trail.

The Washington Area Bicyclist Association (WABA) supports the Purple Line because of the benefits rails bring to the CCT and the Metropolitan Branch Trail. WABA has observed: "Efforts to build a trail network will be severely undercut if decision makers become convinced trails should never be built alongside transit. For example, we cannot expect local government to complete the Metropolitan Branch Trail alongside the CSX and Metro Red Line between Silver Spring and Union Station if politicians are only hearing that trails cannot share the same corridor with rails."