Next week – August 28th to be exact - marks the one-year anniversary of the groundbreaking for the Purple Line! So for this edition of our “Construction News to Know,” we’re returning to the site of last year’s ceremony to see what has changed since the purple shovels first went into the ground. 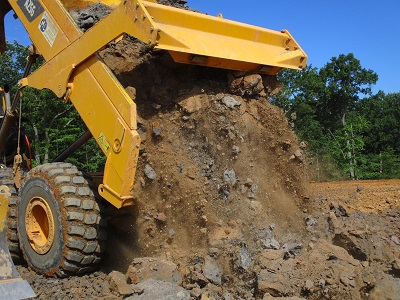 As you may recall, the groundbreaking was held just outside of New Carrollton in the Glenridge community of Prince George’s County, at the site of the future maintenance and train storage facility for the Purple Line. The roughly twelve-acre site was formerly used by the Maryland National Capital Park and Planning Commission as a maintenance facility, but it was transferred to the state to facilitate the construction of the facilities that are needed to support the Purple Line’s operations. 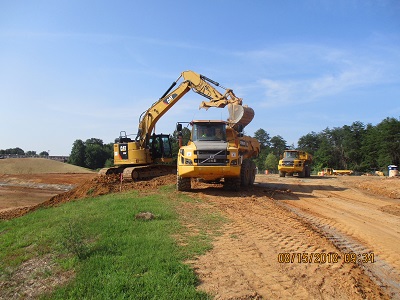 After twelve months of construction, the site is virtually unrecognizable from a year ago. The maintenance sheds have been demolished, trees cleared, and some serious earth moving has been taking place. If you’ve driven by the property, it might just look like a big pile of dirt, but that will slowly begin to change. Construction crews are actively regrading the land to establish the building pad for the rail yard and the operations center. And construction on the operations building, which will serve as the primary control center for the Purple Line, will follow in the not too distant future. 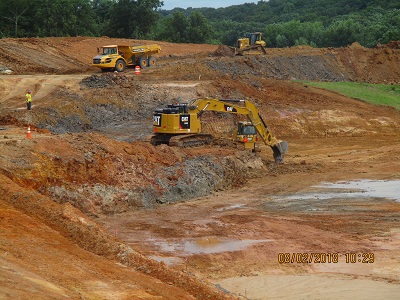 We can’t wait to see what changes will be present one year from now on the second anniversary of the groundbreaking.

Another Groundbreaking in Bethesda

August must be a popular month for groundbreakings because another important project with implications for the Purple Line broke ground this month. However, this one concerns a transformational private development at the Purple Line’s western terminus in Bethesda.

Even though construction began many, many months ago, the Carr Properties’ held a belated groundbreaking to celebrate the start of construction on their forthcoming office/residential development that will sit atop the future Bethesda Purple Line station. 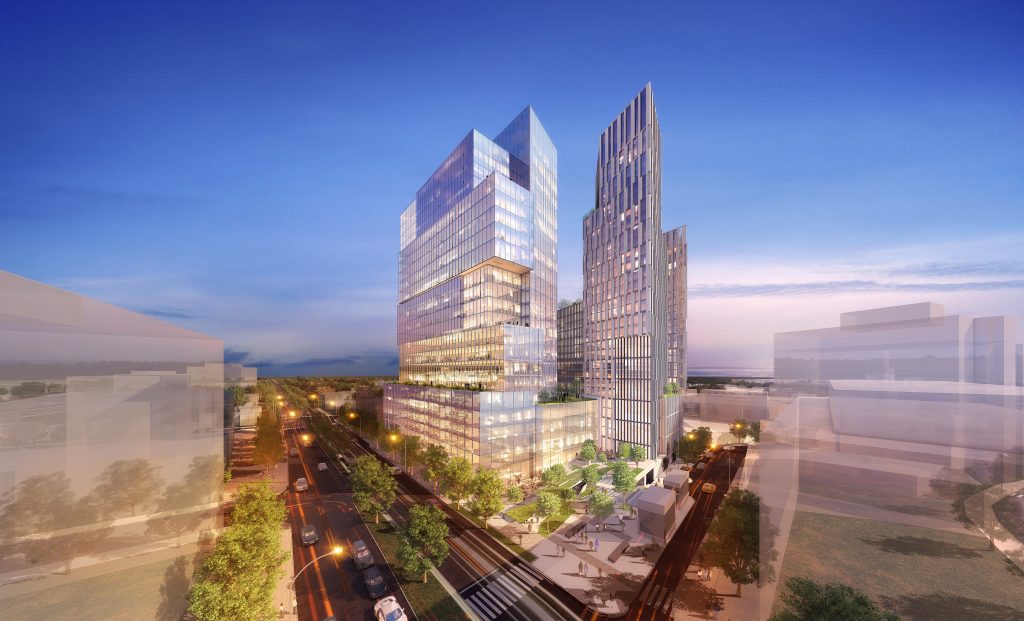 The office building will go by the moniker of “The Wilson,” and the project’s two residential towers will look no further than the street they’re located on for their name: “The Elm." Combined, the project will deliver almost 1 million square feet of new development right above the Purple Line.

Governor Larry Hogan was among those present to commemorate the occasion. During his remarks, he noted the Purple Line’s role in the project coming to fruition. “I think that everyone knows that this would not have happened without the Purple Line and the investment in Metro,” said Governor Hogan from the podium. “This project will create jobs and drive our state’s economy.” 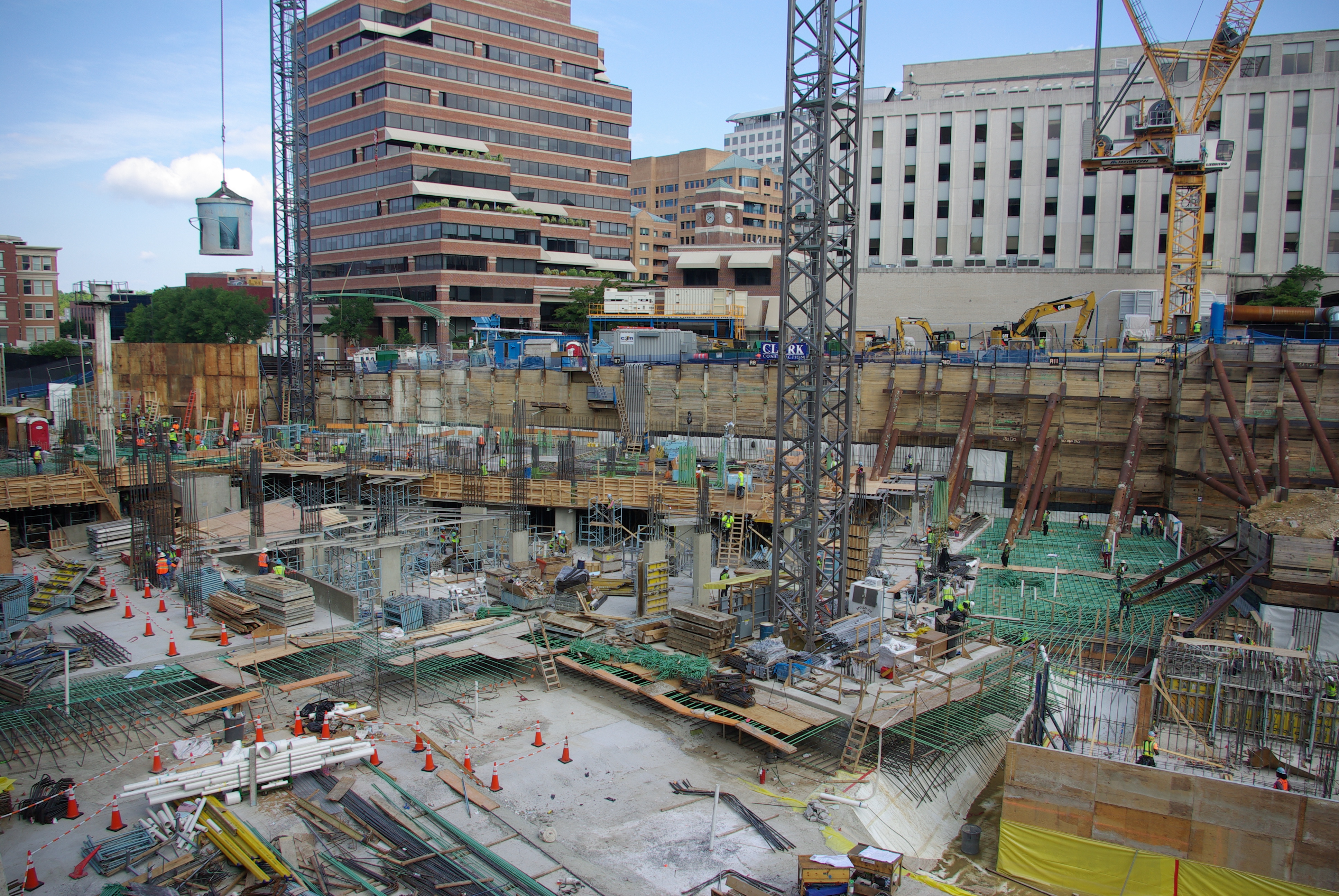 Construction crews are still working their way towards street level. The Purple Line station platform will be underground against the far wall in the picture

Carr Properties is also constructing the portion of the Capital Crescent Trail that will run beneath their building before daylighting into Woodmont Plaza and the planned public park that will be located there. The trail will run slightly south of the Purple Line tracks when it crosses underneath of Wisconsin Avenue and rejoin it as it travels through the Carr property. That's not all that cyclists have to look forward to with the new realigned trail. Carr is concurrently constructing space for a bicycle storage facility that will have parking for hundreds of bikes. The facility may even feature showers or changing rooms, but those details will be worked out down the line. 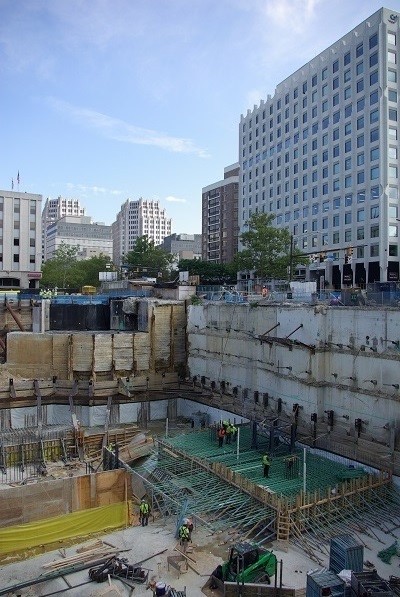 Looking north towards the intersection of Wisconsin Ave. and Elm St.

Last but not least, the excavation of the Bethesda South Metro Entrance, which will have elevators that stop at the Purple Line platform, is also proceeding at the corner of Elm St. and Wisconsin Ave. Montgomery County expects the excavation to take about two years, and another two years will be spent pouring the concrete and installing the high-speed elevators that will carry passengers 120 feet below Wisconsin Avenue to the Metro platform. 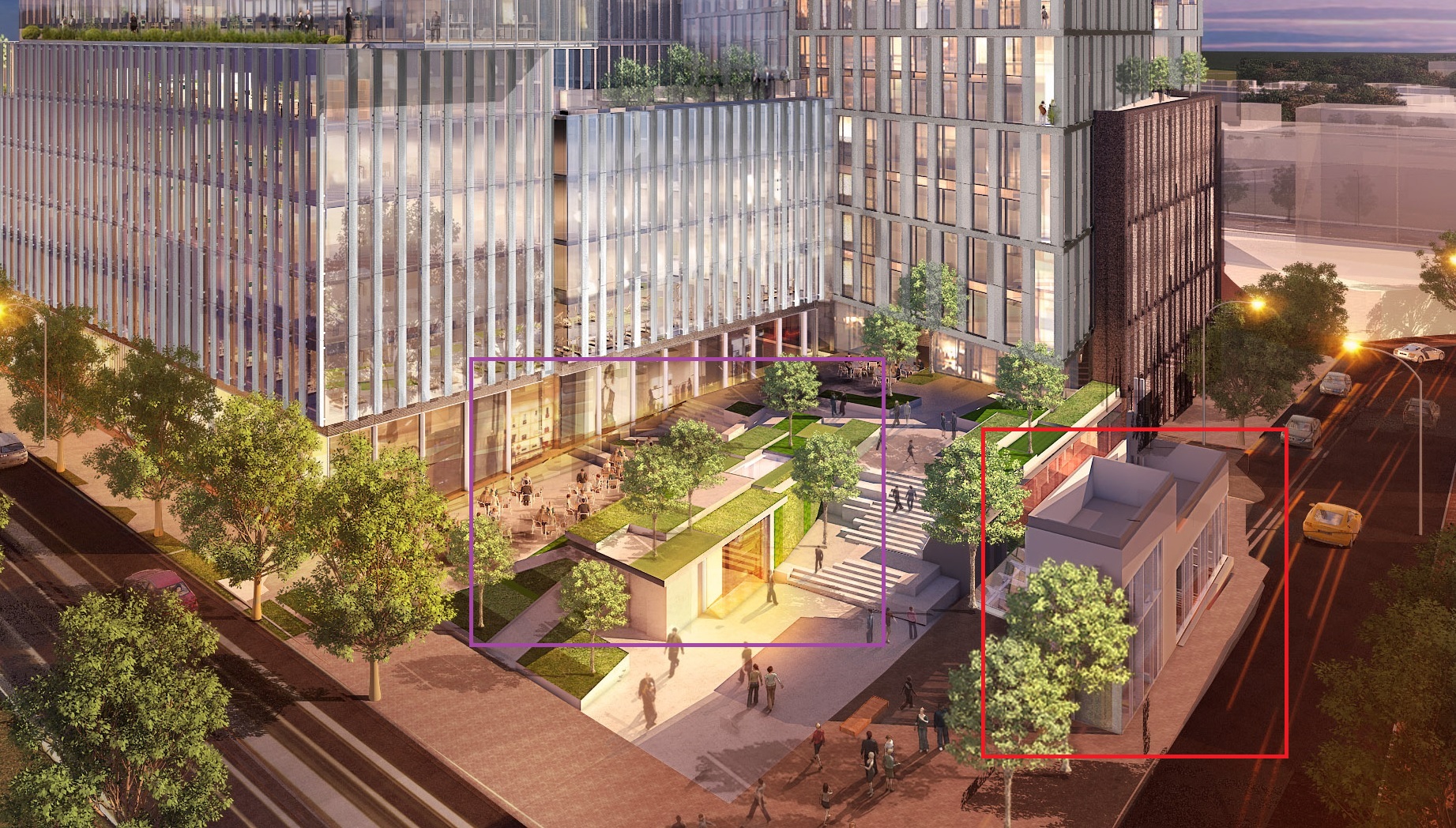 Conceptual rendering of the plaza at corner of Wisconsin Ave and Elm St. The red box shows location of high-speed elevators that will take riders to Metro platform, and purple box is where riders will find an elevator, escalator and stairs down the Purple Line station

This Carr Properties' project is, perhaps, the clearest example yet of a private development that was only made possible by the Purple Line. But it’s also true that without The Wilson and The Elm, the Purple Line and the Capital Crescent Trail would not be nearly as functional or well-designed as would have otherwise been the case. Can you say win-win?!

Stay tuned - our next forum in the Envisioning the Purple Line series will be held in...College Park in October! The date and time will be announced soon, as will the terrific slate of speakers, so keep an eye out for that announcement.

Thanks again to everyone who took the time to respond to our heartfelt appeal this month! We very much appreciate your quick and generous action on our behalf. Take a peek at our terrific supporters to date! Please consider joining these folks - the benefits of sponsorship are listed on our website - donating is easy - just follow this link: I'd like to become a sponsor!

As always, if you have any questions, contact us at [email protected] Again, thank you for your support. Your feedback is always welcome - let us know where we can help!