Please feel free to share this bi-weekly newsletter with others who may appreciate information about the project. Thank you for your feedback to our newsletter - we hope you continue to find the information useful and proactive!

Along with the construction issues noted below, we have an exciting recap of our most recent forum in the Envisioning the Purple Line series, held earlier this week in Riverdale Park (scroll down for more information).

As always, if you have any feedback on how we can improve the newsletter, drop us a line at [email protected]. If you find the information contained in our newsletter useful, please consider a donation to us (we are a not-for-profit organization).

Demolition began earlier this month at the strip mall at East-West Highway and Rt. 29. The Purple Line will use part of the parcel previously occupied by the Fedex Kinkos and Rite Aid. As the line proceeds into the Silver Spring station, it will then cross over the MARC and Metro tracks and rise to a station on the far side of the Silver Spring Transit center. That cost saving adjustment meant that the acquisition and demolition of 1110 Bonifant St. would not be necessary. More information can be found in Bethesda Beat's article: Demolition of Former FedEx, Kinkos Buildings for Purple Line Construction in Downtown Silver Spring. The Starbucks and Einstein Bros Bagels will not be impacted by the project and will remain open.

On Monday, the fifth in Purple Line NOW’s Envisioning the Purple Line series was held in Riverdale Park, where audience members heard from, among others, the CEO of the construction consortium building the Purple Line. More than 70 people braved the stormy weather to learn about the latest goings-on with the project, but lucky for you, we've got a full recap of the event if you weren't able to make it. 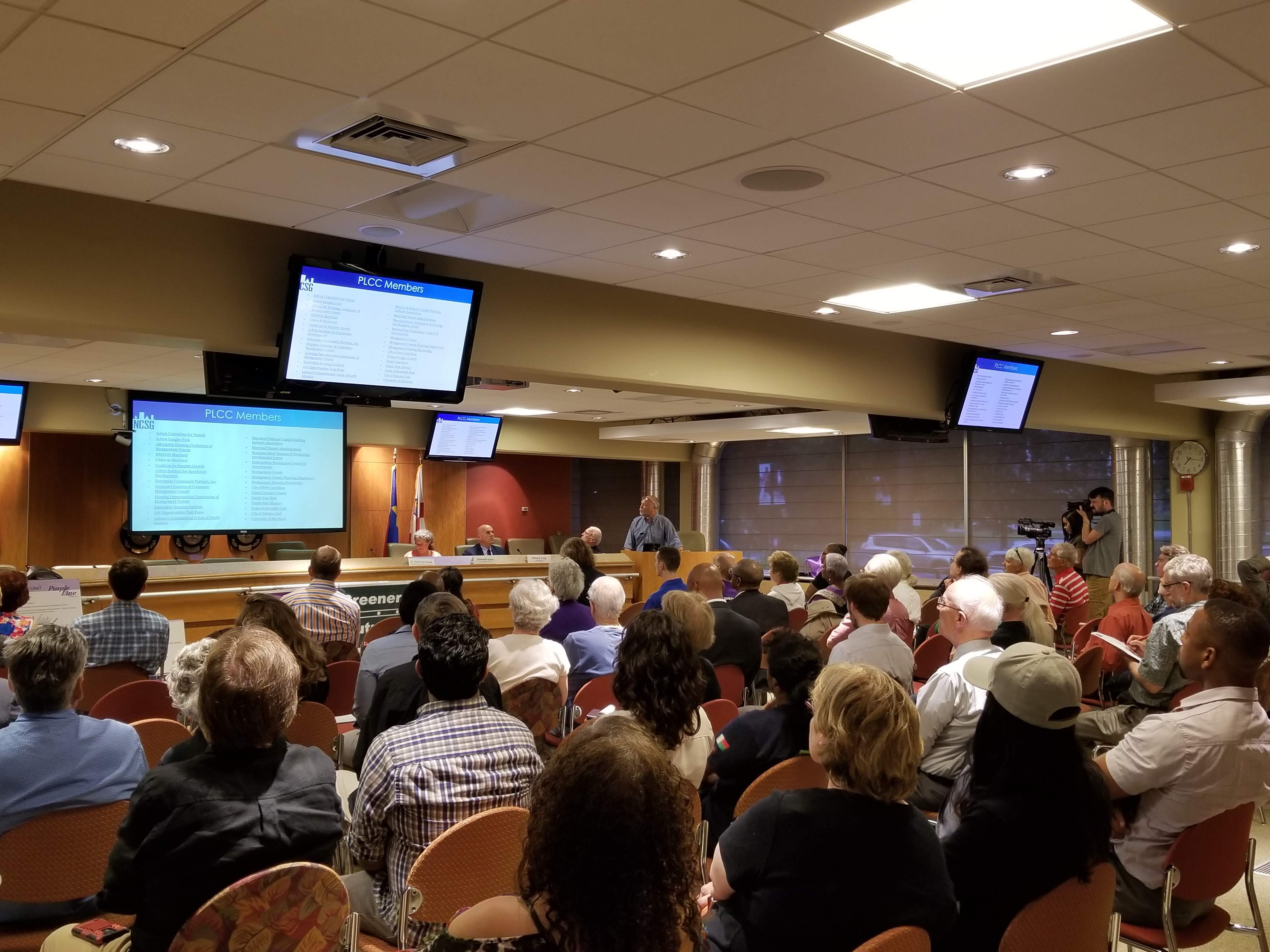 Purple Line Transit Partners CEO, Fred Craig, kicked off the forum by describing his background and how he came to lead the project. Mr. Craig commented that he’s only been on the job for five months, but in that short time, several significant construction activities have gotten underway. Most notably, PLTP is actively working on digging the elevator shaft at the Bethesda station, the Lyttonsville Place bridge has been demolished, and the construction team has excavated 120 feet into the Plymouth Street tunnel in Silver Spring.

During his remarks, Mr. Craig related one anecdote to the audience to illustrate how seriously PLTP takes their responsibility to the community. A resident recently called the Purple Line construction hotline (240-424-5325) to report a pair of shovels and a pile of gravel that were inadvertently left in a roadway. Within twenty minutes of receiving the complaint, the shovels were removed from the roadway, and within 90 minutes, the gravel was cleaned up. On a project of this size, mistakes are bound to occur, but Mr. Craig said that he was proud of how quickly his crews responded to the complaint. 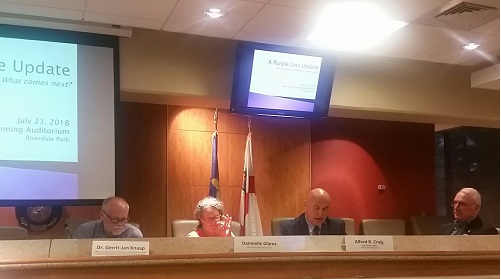 Mr. Craig discussed some of the other transit projects that he’s worked on, including the Cincinnati Streetcar, but he said the Purple Line was unique in that it was one of the first circumferential, or suburb-to-suburb, rail lines in the country. He also marveled at the amount of construction that the Purple Line has stimulated throughout the corridor before it has even begun service. He noted that there is more development around the Purple Line route and future station areas than there are square feet in the Pentagon. We’ll pause so you can Google that!

Dannielle Glaros, Chair of the Prince George's County Council was up next with an uplifting update from the perspective of her constituents and how the county is mitigating impacts to residents and businesses.

One of the most exciting aspects of the Purple Line is that it will "provide direct connections to WMATA's Green, Orange, and Red lines at Bethesda, Silver Spring, College Park, and New Carrollton, along with connections to MARC, Amtrak, and local bus services." She was particularly excited about the doors that the Purple Line will open to county residents, especially young adults who are attending the University of Maryland, and who may not own a car. 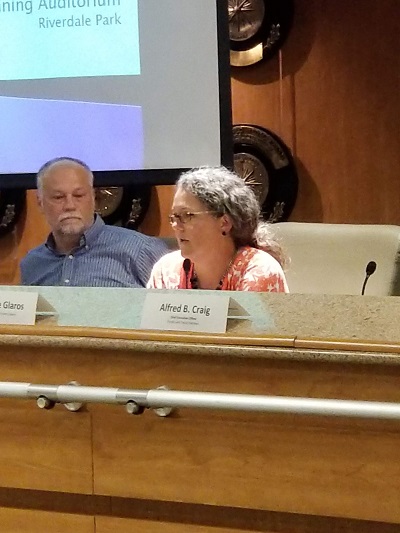 Councilmember Glaros said that she has focused her attention on three issues: lifting up people economically along the corridor, support to small businesses and the preservation and expansion of affordable housing.

Ms. Glaros provided a few updates on some exciting new developments soon to be a reality. Kaiser Permanente is scheduled to open a "new 176,000-square-foot administrative building in the New Carrollton Transit Center in Prince George’s County" later this year. Education technology firm 2U opened its new headquarters near the New Carrollton Metro last year and expects to employ more than 1,500 over the next few years.

Councilmember Glaros also touched on how Prince George’s County is staying on top of the project. She reported that there is a deep internal team working on the Purple Line at the county level, from planning staff to personnel in the Department of Public Works and Transportation, which are coordinating elements of the project with PLTP and the State. In addition, the County Council is helping to shape positive outcomes. She was gratified by recent actions taken by the Prince George’s County Council, as well as Montgomery County Council, to protect those who are most impacted along the corridor. She noted that both Montgomery and Prince George’s County provided funding in their fiscal year 2019 budgets for National Center for Smart Growth’s work to ensure equitable distribution of benefits, and that both counties provided varying levels of financial and technical support for small businesses. Councilmember Glaros hopes that both counties can build off of these efforts in future years and continue to provide on-going support to the impacted businesses.

Ms. Glaros emphasized the need for the community to stay involved and "actively pushing to make sure we are lifting up all community members." She encouraged those not yet involved to find ways to join in, saying "the successful completion of the project will require the continued involvement of residents." She urged those in attendance to sign up for the text updates offered by PLTP and to attend the meetings of the Community Advisory Teams.

Gerrit Knaap, Director of the National Center for Smart Growth at the University of Maryland, rounded out the panel by providing a status update on the Purple Line Corridor Coalition’s work to ensure that the social and economic opportunities created by the Purple Line are realized.

As Dr. Knaap described it, the PLCC focuses on everything beyond the Purple Line tracks, like economic development, affordable housing, and minimizing impacts to small businesses. He explained that currently, the City of Baltimore and the I-270 corridor are widely considered to be two of leading economic engines of the state, but he predicted that the Purple Line corridor will also come to be thought of as an economic powerhouse of the state in the not too distant future. He noted that the Purple Line route crosses thriving areas such as Bethesda and College Park, but that it also has pockets of poverty. Through his slide presentation, Dr. Knaap showed how the Purple Line will stitch together some of the most economically advantaged and disadvantaged communities, which will consequently create enormous potential to provide equity across the corridor.

Up to this point, the PLCC has been working to establish baseline data that will aid them in assessing whether Montgomery and Prince George's counties are making progress towards the stated goals such as building a balanced labor market across the corridor, or if we are falling short of the ideals set forth in the Community Agreement. The organization intends to collect data throughout the construction period and revisit the data each year to determine if we are meeting our goals or if we need to renew our commitment to specific objectives. 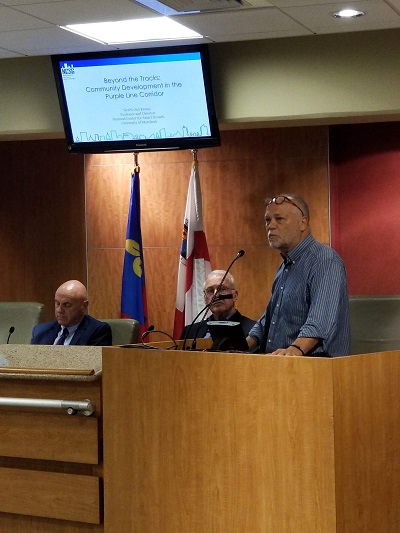 Dr. Knaap told the audience that there is more riding on the success of Purple Line than just improved mobility between two counties. As the first light rail project in the capital region, the Purple Line will be scrutinized closely. He cautioned that if we don’t do it right, we might not see the Purple Line extended to Largo one day, as some attendees called for. But if it achieves its full potential, it could usher in additional light rail infrastructure in the Washington D.C. area.

Dr. Knaap concluded his remarks by announcing that last week the organization submitted a $2 million grant proposal to the Federal Transit Administration to expand and strengthen their efforts. If funded, the organization intends to use the grant money to bolster the preservation of small businesses, create a mobility action plan which will examine how the Purple Line can and should interface with other modes of transportation like ride sharing services and bus routes, and developing a plan to capture increased land values around the stations to fund other priorities of the community.

There was so much more that was discussed at the forum, and we’ll be sharing this information over the coming weeks in future editions of our bi-weekly newsletter. In the meantime, visit our website for the latest news on the project, and follow us on Twitter and Facebook while you’re at it!

Please take a moment, especially if you haven't given this year, to become a sponsor of our Envisioning the Purple Line series. Your name or your business name will be highlighted at all of the fora in the Envisioning the Purple Line series, as well on our website, for one year following your donation. Sponsoring is easy - and we are appreciative of all donations, large and small. Here's the link to get you started: Yes, I'll help Purple Line NOW!