While we have heard from, and are encouraged by, Governor Hogan’s capable staff who tell us that the state is committed to completing the project, as we mentioned in the last edition of Purple Line NOW News, we want to hear it from Maryland’s top elected official himself.

If you agree with us, please send a quick note to Governor Hogan and ask him to publicly announce his commitment to complete the Purple Line and take the steps necessary to swiftly resume construction.

Thank you in advance!

We have a new feature for those who prefer to print off our newsletter (or save it to a PDF) instead of reading in your email. If you visit our website and click on the title of the article you wish to print or save, you'll be brought to a page that has a small printer and PDF icon at the top. Click on the one you prefer. You do not need our permission to circulate or forward our newsletter. 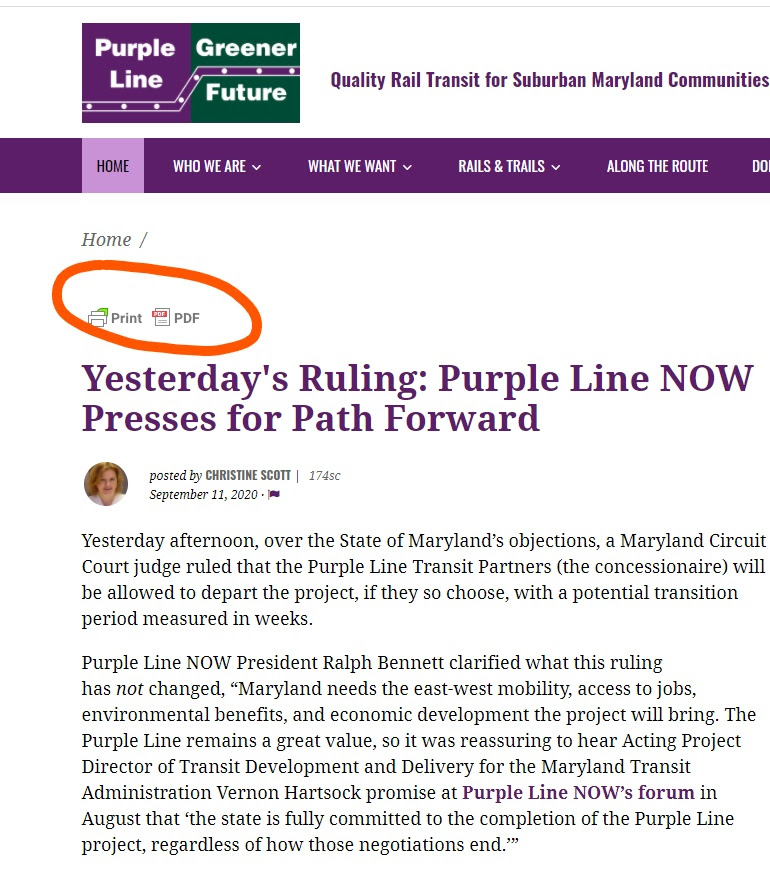 Please Help Us Continue Our Work!

In order for us to provide events like last month's forum for you at no cost and information like that which is contained in this newsletter, we ask you to consider supporting Purple Line NOW at whatever level you are most comfortable - all donations are very much appreciated! The black DONATE button below will take you directly to our donation page.

We will publicize your name (or your organization’s name) on our website and at our events as a way of thanking you and letting the community know how much you care about seeing this project finally become a reality. We appreciate all donations, small or large. Thank you, thank you!

As we did in the previous edition of the Purple Line NEWs where we highlighted some of the key points from the Montgomery County Council’s briefing from the state, this week we bring you their briefing to the Prince George’s County Council which occurred on September 22, 2020.

Because the state’s briefing was similar to the Montgomery County briefing, we will focus primarily on new information that was given and on the questions asked by councilmembers. If you want additional information, we encourage you to listen to the briefing in full. As always, if you have questions, please send them along to us and we will try to get answers for you.

While he reiterated that he cannot talk about their legal strategy on the advice of counsel, he did say their focus right now is to “deliver the project to residents of Montgomery and Prince George’s counties." He continued by saying that they are coordinating closely with the concessionaire with the priority of making things safe as they begin to “button up” the various sites along the alignment. 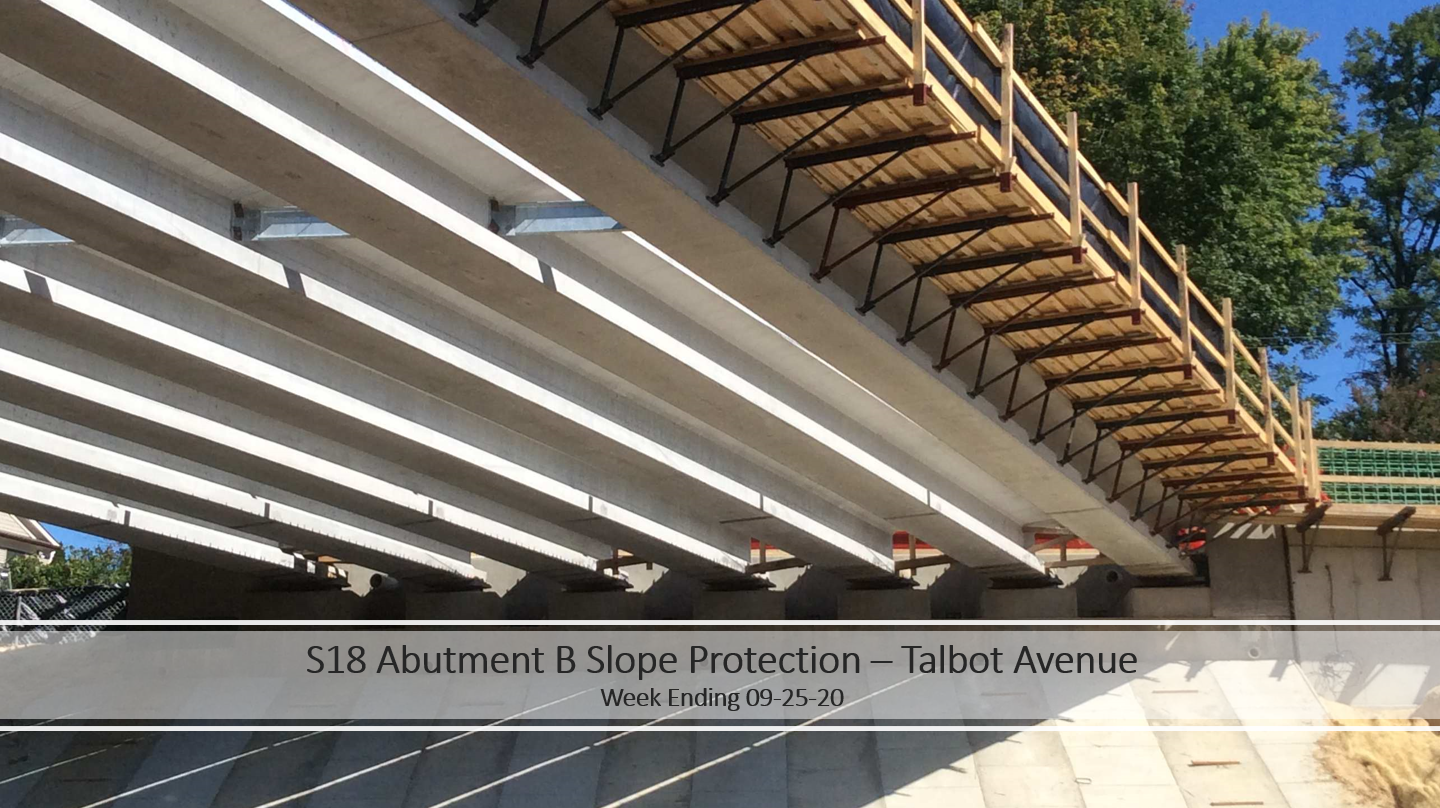 Quinn said that the teams on the project delivery side are meeting daily with PLTP (the concessionaire) and working on solutions on every segment of the alignment for an orderly transition. He said that there were three phases in that transition:

Quinn said it is “too early to speculate” what the long-term plan will be. They will be taking a four- to six-month period to evaluate the entire scope of work to be done and identify options moving forward. He repeated what he said at Montgomery County’s briefing as it relates to settlement, chiefly that "the state remains open to a fair and reasonable settlement with a good partner for next 30 years.”

The plan for transition will be three-fold:

Matt Pollack spoke next and said that his team and PLTP are focused on protection of the work that has been done, leaving sites in safe condition, ensuring that the volumes of information and documents are in place, and talking to subcontractors in respect to the scope of work to be done. He mentioned that once the state fully takes over the management of the project, they will be managing in excess of 100 contracts and the state will need to bring on more staff to administrate those contracts previously managed by PLTP. However, he has “confidence that the right team is in place to move the project forward.” 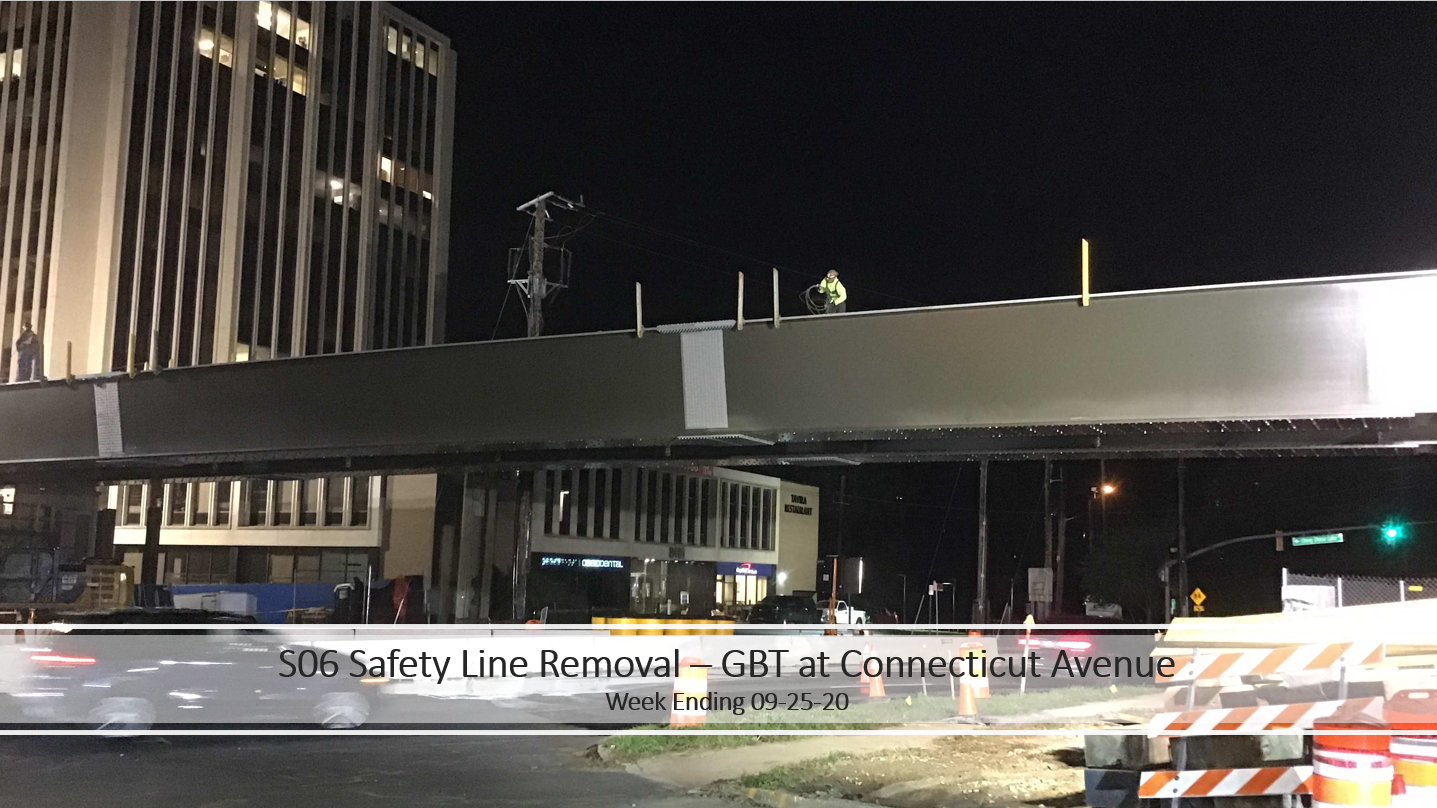 Councilmember Deni Taveras asked specific questions about whether, once all the bills have been paid and the increase in costs due to finding new partners to work with would not be more than just settling the lawsuit. Administrator Quinn answered that the amount the concessionaire was seeking was $800M, and while there was a monetary component to a settlement, there was also a “future risk” component, along with risks that would have been shifted to the counties, so that played into their decision, as well.

Taveras pressed Quinn and Pollack on whether they were taking into consideration businesses who were struggling because of the project’s construction, then the pandemic, and now looking toward having to endure a long delay in the project. The councilmember wanted to know what they were doing to help preserve those businesses. Quinn said that their priority in this short term is to identify work in those areas and that they would then try to mitigate some of that disruption. He said it would be “priority number one.”

Councilmember Dannielle Glaros was up next. You may remember the councilmember spoke about all that was going on in her district at our Purple Line NOW forum in August. She has been involved with the Purple Line for many years, many predating her time as a councilmember. Glaros said she is “trying to understand what is happening right now. Hardly any construction is going on along the line in her district where it was happening in early August.” She asked whether the state or PLTP is the appropriate point of contact right now? Mr. Pollack said that councilmembers and their residents should consider the state as their point person going forward. He said right now, the concessionaire is fully focused on demobilizing before being done with the project.

Currently, the state is negotiating the transfer agreement. The importance of the transfer agreement is that it gives the state the authority to work with some of the subcontractors. Pollack said that “until we have access to those subcontractors, we do not have a contract to move the work forward.” The actual sites have not been turned over yet, but they are creating protective measures for closing those sites. Once done, sometime in the next week or so, the concessionaire will hand over keys.

Glaros said, “Financially, I can’t wrap my head around this,” as she continued to press about where the money is going to come from to complete the project if the state still has to pay PLTC for some level of work. “I’m trying to figure out how anything that is happening right now is in the best interest of the county taxpayer, the state taxpayer. Help me understand the financial piece. How is the state going to deliver a project that does not skyrocket in price?”

Jacqueline Hartman, Chief Financial Officer for MDOT provided some specifics by explaining that “there are no past expenses sitting out there. In terms of moving forward, [had the concessionaire not quit], the next phase would have come from a TIFIA loan that developer would have taken out.” This aligns with what we have already heard that Maryland has paid directly for all the work thus far and that PLTP had not yet spent any of its contribution to the project or used its existing financing.

In lieu of using the contractor’s TIFIA loan, the state will take out alternate financing tied to the flexibility of the transportation trust fund which, she said, is a “consolidated source for all of transportation needs.” They will use that fund to keep the project moving forward, Hartman said, "and it would look and feel a whole lot like it did under P3.” Hartman indicated that this approach was preferred because, unlike directly issuing a bond, lending against the transportation trust fund has a limited effect on perceptions of Maryland’s overall credit worthiness. Glaros asked Ms. Hartman to clarify whether the rumor was true that the costs associated with the state take-over of the Purple Line means that other transit projects would be put on hold. Hartman said that “the trust fund supports all transportation and while it could mean additional cuts to transit, that is not the intent.”

Glaros said that she had already been concerned about some of the “value engineering” that Governor Hogan put in place at the contract start and requested whether we might see further cuts during the transfer. Mr. Pollack said that they were not seeing this as an opportunity for further value engineering. The design was largely completed and the state intends to pay the design team that had been working for PLTP to finish that work.

Glaros commented on her lack of confidence in the state’s ability to manage hundreds of contracts. She said, “this has been a roller coaster ride. Hanging at the top of loop upside down. I’m not sure whether we are going forward or backward and it is very tough on residents who so need the benefits of the project being left with empty infrastructure for a time frame that is not clear at this moment in time.” She encouraged the state to tell residents when they can expect to see a restart date as soon as possible.

Councilmember Mel Franklin asked directly whether construction has, in fact, stopped. “Where,” he asked, “is the state literally right now?” Mr. Pollack said that the work that is going on is only to make the sites safe as they close the them down. He said they are talking to those subcontractors they are able to while they wait for the negotiations to finish which will then allow them access to all subcontractors. 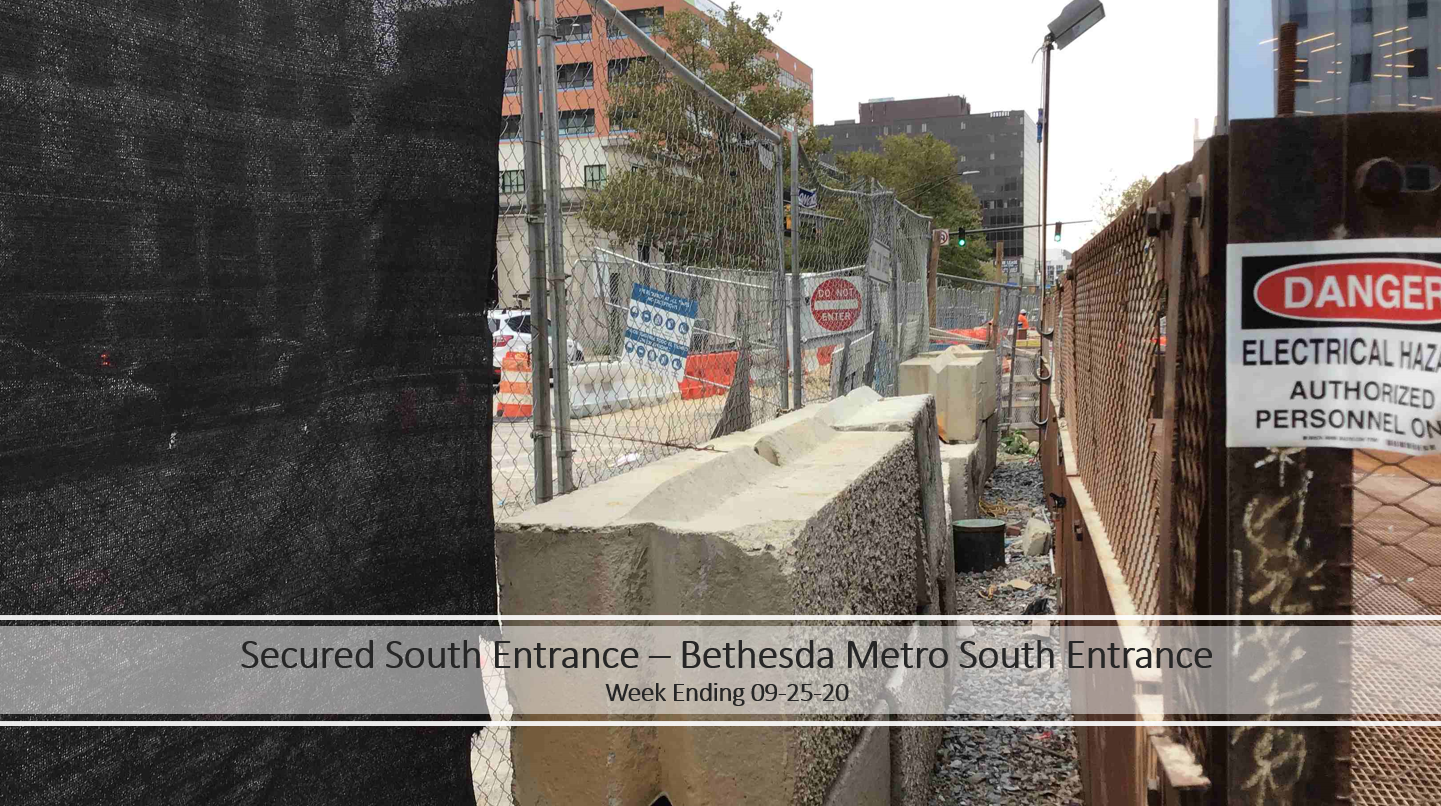 Purple Line in the News

The Purple Line has certainly been in the news of late. We have gathered some of the most timely articles here for you: