All of us here at Purple Line NOW hope that you and your loved ones remain healthy during this pandemic. Please, stay safe!

What is the status of Purple Line construction?

First, the bad news: the current group of firms building the line, the Purple Line Transit Constructors (PLTC), is threatening to leave the project if they are not granted additional funding and time to accommodate external challenges. If negotiations are not successful, the concessionaire, the Purple Line Transit Partners (PLTP), would have to find a new firm to lead the construction effort. As you probably know, the current plan is to open the College Park to New Carrollton portion of the line in late 2022 and the section from College Park to Bethesda (via Silver Spring) in 2023. However, last Friday’s news may cast those dates into doubt.

The good news is that, according to the latest round of Community Advisory Team (CAT) presentations, 28% of the construction is now completed. Much of the early work focused on preparing the right of way and utility location, which is particularly challenging in the dense environment along the 16.2-mile Purple Line corridor.

However, there are also many tangible signs of progress, from the excavated Manchester Tunnel to the replacement of the Lyttonsville Bridge, to the soaring elevated track that crosses over Rt. 29 at the Silver Spring station. The railcars themselves have also made progress, with assembly occurring in New York and testing planned for later this year in the Prince George’s county rail yard.

The current round of Community Advisory Team briefings is ongoing, so do check them out to see status updates specific to your community and new renderings of what the line and stations may look like upon completion. We will bring you highlights from those presentation in future newsletters, but for now, if you visit the website, you can view some newly added renderings like the one below of the Bethesda Station we highlighted in our previous newsletter. 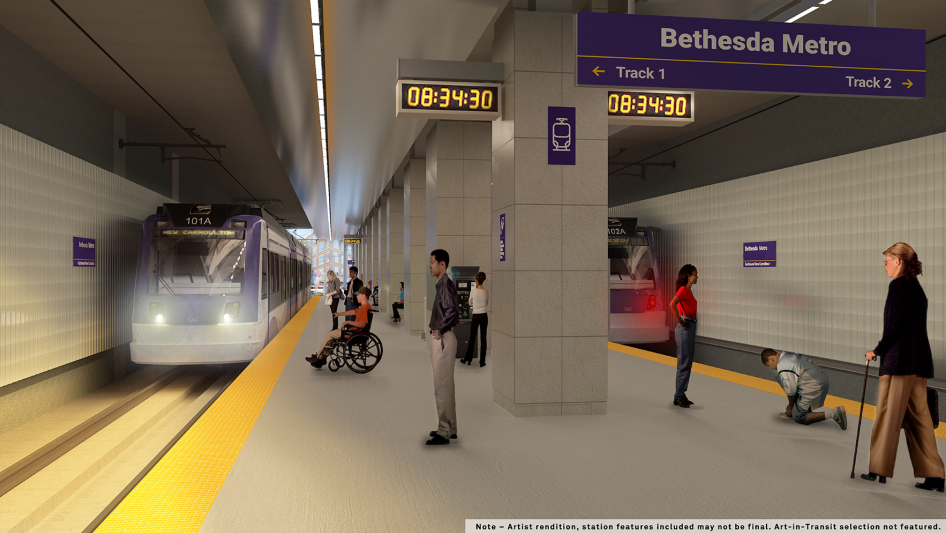 For now, here are four questions and answers that may help explain what is happening and what it may mean as we move forward.

Who are the Purple Line Transit Constructors?

The Purple Line is being built by a consortium of private companies that have entered a Public-Private Partnership (P3) arrangement with the state of Maryland. That partnership is contracted to last 36 years and includes the design, build, operations, maintenance, and finance of the Purple Line, but Maryland retains ownership.

Here are two graphics that may help explain the structure. 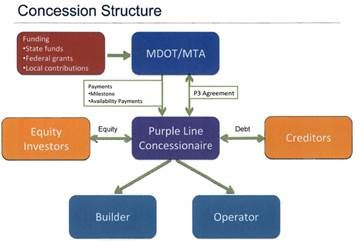 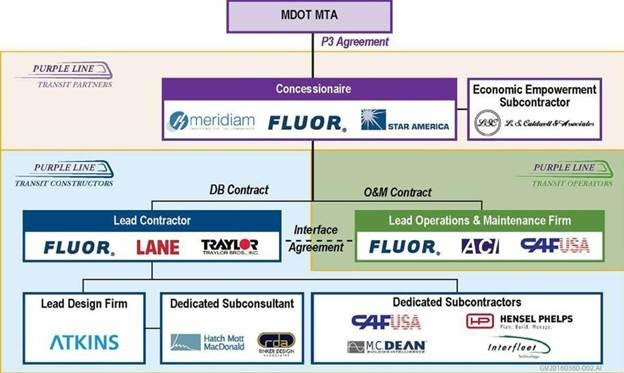 What are the sources of delays and new costs?

In their letter last week to the state of Maryland, the Purple Line Transit Constructors focused on events that are beyond their control: the suspension for over a year of the Record of Decision that was necessary to receive a critical federal matching grant at the behest of litigious opponents; delays in acquiring the right of way and related easements; changing requirements and slow responses from the CSX freight rail company regarding a crash wall; and finally, alleged changes to the way Maryland enforced environmental rules relating to ponds.

Additionally, according to an article in the Washington Post (April 15, 2020), the builders had warned that delays and costs stemming from COVID-19 related safety measures may lead to a Force Majeure ("Act of God") claim, but that issue was not included in the letter.

Maryland has disputed some of these criticisms in the past and also argued that, even when external events were clearly to blame, the Purple Line Transit Constructors could have done a better job of adapting to circumstances. Nonetheless, as Katherine Shaver reported in the Washington Post (May 1, 2020), the Maryland Transit Administration has acknowledged the need for negotiations to address delays going back to the lawsuit that prompted delays. Likewise, the Constructors' estimate of $130 million in costs from the lawsuit aligns with MTA’s warnings to Judge Leon of the cost of suspending the Record of Decision.

Why have the negotiations dragged on so long?

The difficulty in negotiations has been reported in prior years and has already led to a new CEO of the concessionaire last year. Some progress has been made – last summer, the state granted a five-month delay, but did not reach any accord on cost relief. According to the concessionaire, as reported in Bethesda Magazine (May 1, 2020), a possible agreement had been reached in December, but has since broken down. Fortunately,  work continued even through those disputes, which has allowed the project to reach that 28% completion mark.

The challenge now is that there is much that a Public-Private Partnership (P3) can do, but contractual incentives on their own cannot entirely overcome the challenges of building things in America (E. Klein, "Why We Can’t Build", Vox, April 2020). P3s try to distribute risk to those that have the best ability to manage it, and the agreement has given Maryland a strong hand to control costs and schedule.

Governor Larry Hogan, before committing to building the project, had prioritized achieving cost reductions. The builders chosen for this project had been part of a team putting in the lowest cost bid and appear to believe that they are at risk of losing more money if they stay on the project than if they leave. This conflict, particularly in shared risk areas, does not play to the strongest points of a P3. As Patrick Sabol and Robert Puentes wrote for the Brookings Institute ("Private Capital, Public Good", December 2014), “[P3]s are rarely the lowest-cost way to procure infrastructure for several reasons… Despite these limitations, a well-structured PPP can deliver better value for the public dollar.”

So, what happens next?

The best-case outcome would be the Purple Line Transit Constructors, the Purple Line Transit Partners, and the state of Maryland come together to complete an agreement that preserves the partnership and maintains good stewardship over public funds. The 60- to 90-day departure window means that time is short, but much of the groundwork has been already laid.

In the meantime, reporters will continue to cover the issue and to see whether either side is being intransigent or is making unrealistic cost claims. Replacing the Purple Line Transit Constructors will take time and, given the roughly half a billion-dollar gap between the concessionaire’s bid and those of other competitors, whether the current builder is retained or a new builder is selected, costs will likely rise.

However, the progress that the Purple Line Transit Constructors has already made, combined with commitments by the Governor, the Maryland Transit Administration, Montgomery and Prince George's counties, and the Purple Line Transit Partners, mean that while this disagreement is a threat to the project schedule, if handled properly, should not endanger the project itself. The concessionaire’s search for potential new builders will also inform the ongoing negotiations. If other vendors are eager to step in, that would strengthen Maryland’s hand. Alternatively, if other vendors are hesitant, that would give greater weight to the figures cited by the current builder.

In the meantime, Purple Line NOW calls on all parties to resolve this longstanding dispute and focus on delivering the best value for the people of Maryland.

We are working on bringing an online webinar or presentation to you later this summer, so please stay tuned for further details and a date!

Can You Help Purple Line NOW Continue Its Work?

Purple Line NOW still needs your donations during the year and we appreciate every penny donated. If you would like to make a donation, you can do so by clicking on the black donate button below. Thank you!

We are grateful for ALL of our donors - thank you, thank you, for stepping up to help Purple Line NOW continue its work!