It is hard to believe, but we will be publishing our 100th issue of Purple Line NOW News in early summer! We are planning a commemorative issue and want to take a stroll (ride?!) back to the beginning of the project, specifically the early days of the 1980s, 1990s, and 2000s. If you were around these parts and have photos, an anecdote or two, or even a memory of the work that went into imagining an east-west light rail train, finding support from elected officials, applying for federal funding, or any other hurdle (or achievement), PLEASE send them our way! We will include as many as we can in the issue. Send to Christine Scott, Executive Director at [email protected]. Thank you!

Help Us Continue Our Work - Become a Donor!

**If you do not see your name on our donors' list, we hope you will consider helping us continue our work!**

We use every donation we receive to continue our newsletter, continue offering regular webinars, continue being a strong liaison to help connect you to people who can solve your issues, and continue our strong advocacy for the project in every way possible. If you would like to know more about who we are, why we are asking for donations, and what we do with your gift once it arrives on our doorstep, you can read all about it in our November newsletter.

Thank you so much for your consideration! Unless you tell us otherwise, your name will be listed on our website and in publications for a year following your donation.

Quick update on the SAFE Roads Act we reported on in our last newsletter. The SB 880 is currently being negotiated in committee -- we appreciate everyone who sent in letters of support for the bill. If you haven't had the opportunity to voice your support, please take a moment to contact your state representative.

We have a brief update on the Capital Crescent Trail Tunnel. Montgomery County Department of Transportation (MCDOT) is currently in the process of applying to the RAISE competitive funding program for the completion of the Capital Crescent trail tunnel. If the county is successful in its bid for funding, that news will come later this year.

The funding would go a long way to ensure the construction of the tunnel, but we do not know whether the tunnel will open in conjunction with the Purple Line or remain as it currently stands (to be opened several years following the opening of the Purple Line.)

Purple Line NOW is actively advocating for a safe, fast, and high-quality trail connection through Bethesda to be open in concurrence with the Purple Line and will keep you posted on any developments.

Highlights from the Briefing to the Prince George's County Council

The Purple Line project encompasses a 16.2 mile light rail that will operate between New Carrollton in Prince Georges County and Bethesda in Montgomery County. It will run along a surface that includes 21 stations and connects with WMATA at different locations including MARC, Amtrak, and regional and local bus services.

Mr. Pollack reiterated that the Purple Line will “transform the region by creating convenient dependable east/west access to jobs, recreation, education centers, shopping, and attractions by relieving automobile congestion in one of the most congested areas of the nation which in turn will provide significant environment benefits and will spur economic growth along the alignment.”

Pollack added that the State accomplished “a great deal during the current interim construction period, including advancing the remaining design components to approximately 95%, relocated miles of underground and overhead utilities, advanced the production of cars at the facility in Elmira NY, and obtained final approval for all the Maryland Department of the Environment permits.” 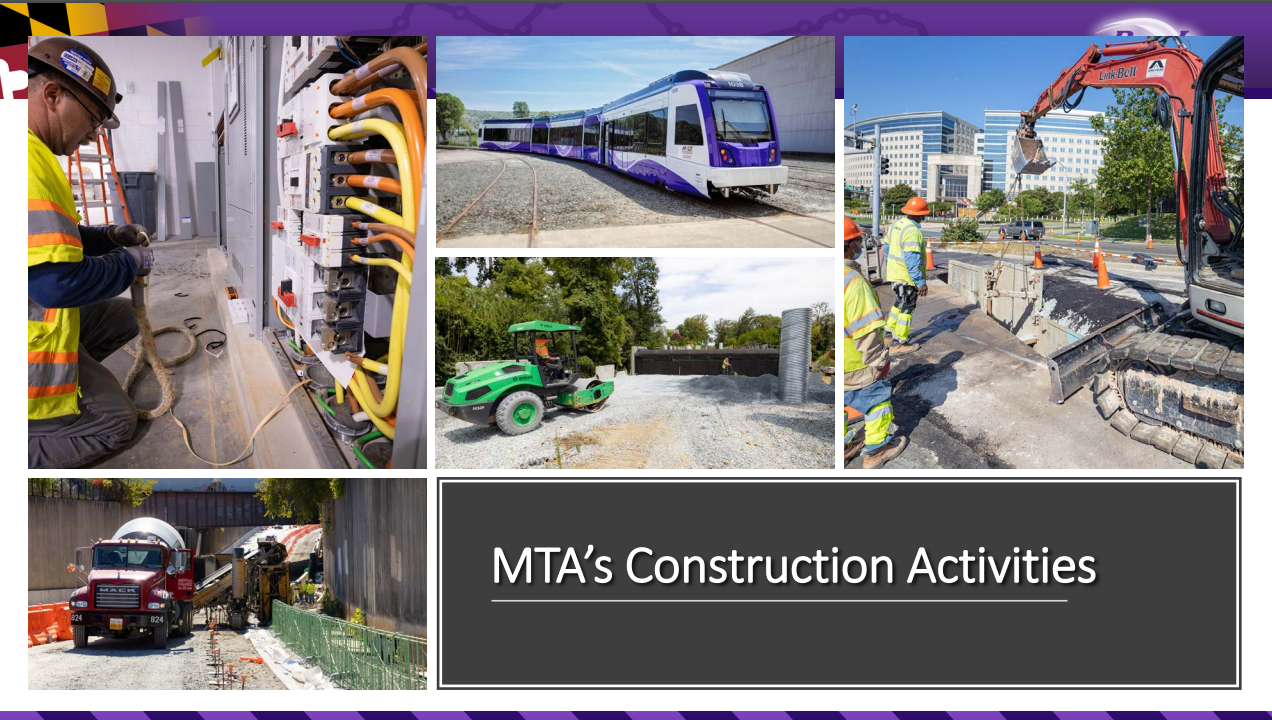 Ongoing Construction Work Along the Corridor

As we reported last month, the modified P3 agreement was approved unanimously by the Board of Public Works on January 26 to proceed. Maryland Transit Solutions (MTS) was chosen as the new design build contractor replacing the former contractor who left the project two years ago. MTS is comprised of two companies, Dragados and OHL and we thought you would like to know a little bit about each company's respective portfolio.

Dragados is one of the largest P3 contractors in the world according to the report from Mr. Pollack. Their work includes the LAX People Mover which happens to be the largest contract in the city of Los Angeles. They have also built the I-5/I-95 corridor P3, Florida’s first P3 and the largest ever executed in the state.

OHL is also one of world’s largest construction companies and their portfolio includes the massive Long Island Railroad Third Track Expansion project in densely populated New York City. Pollack said the company's project experience is especially relevant for the Purple Line. In fact, several key staff are transitioning from the LIRR project, including construction manager, quality manager, and systems integration manager. Pollack also noted that the previous contractor is no longer involved in any portion of the organization per the settlement agreement. 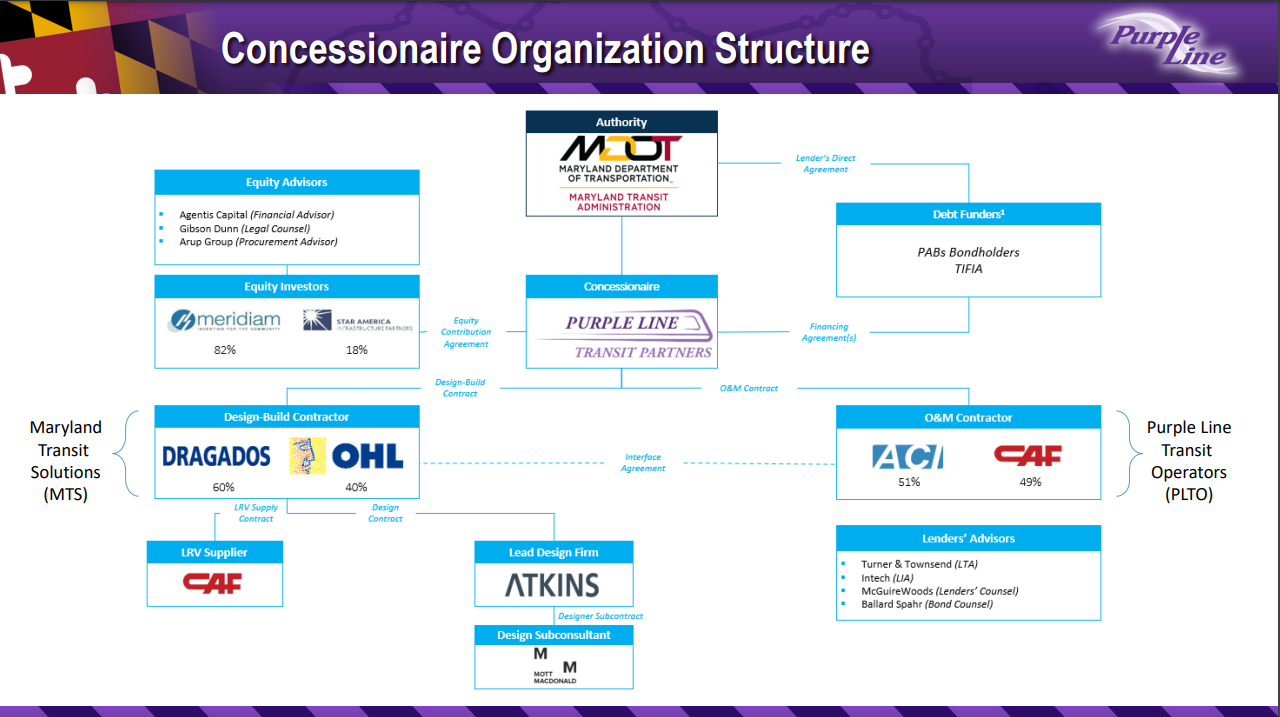 It was emphasized that the total P3 cost is not just the cost to design and build the project, but also includes the total amount of payments to be made over the 40-year life of the agreement and that encompasses “all of PLTP costs to design, construct, and commission this highly complex project including related financing costs.”

This also includes work completed by contractors assigned to MDOT MTA over the past year (called the “interim construction period”), settlement payments previously approved and already paid to the design build contractor, and payment of private activity bonds issued to fund construction under the prior design build contract and includes capital renewal costs for the 30-year maintenance period.

Costs are higher than they were six years ago when the P3 was first approved for reasons we have reported on in previous newsletters, namely the specific project challenges as a result of the lawsuits and federal court action which delayed the project, but also a number of factors not unique to the Purple Line. Those include increased material cost and delays, labor shortages and the loss of labor, mandated wage increases that became law in the last year, and a significant upheaval in the insurance market, as well as inflation. 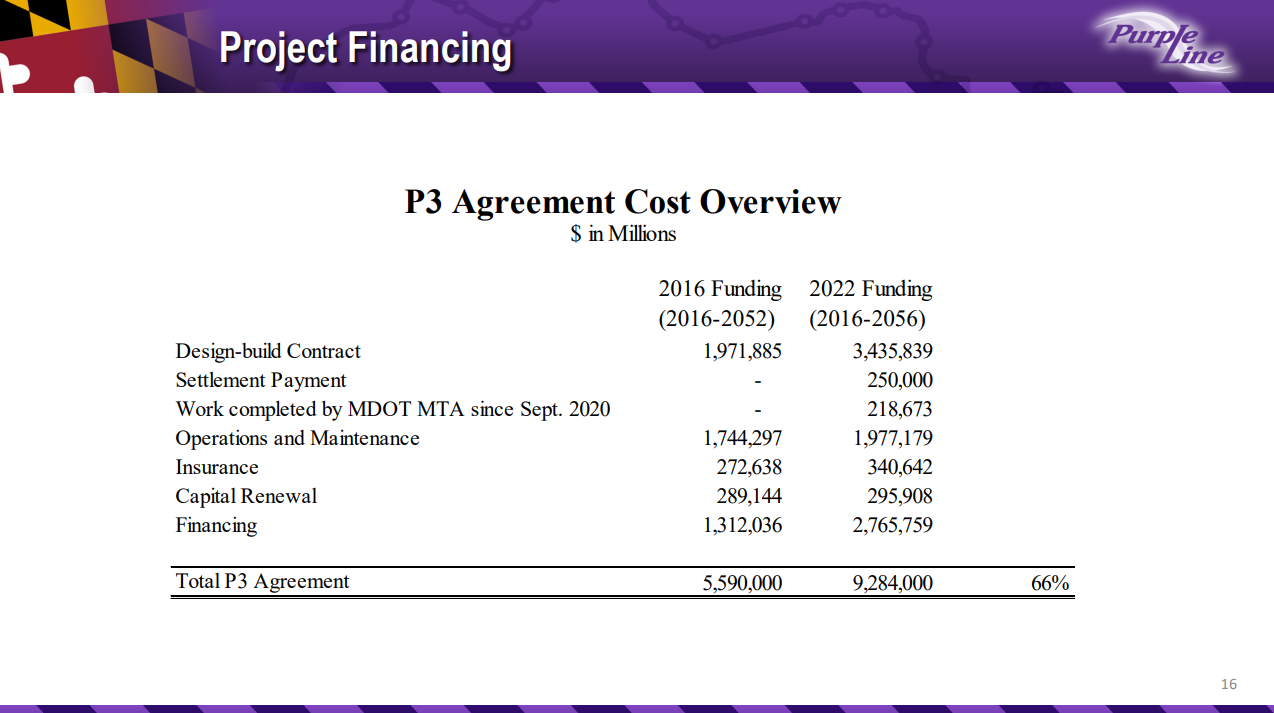 Where is the financing coming from?

$0.3 billion in private equity that the concessionaire (PLTP) will be bringing into deal.

The State will make availability payments over the 30 year operations and maintenance period for the contract to provide for the repayment of these amounts. MDOT is working with the State's Treasurer’s Office to confirm those payments will not count as State tax-supported debt. 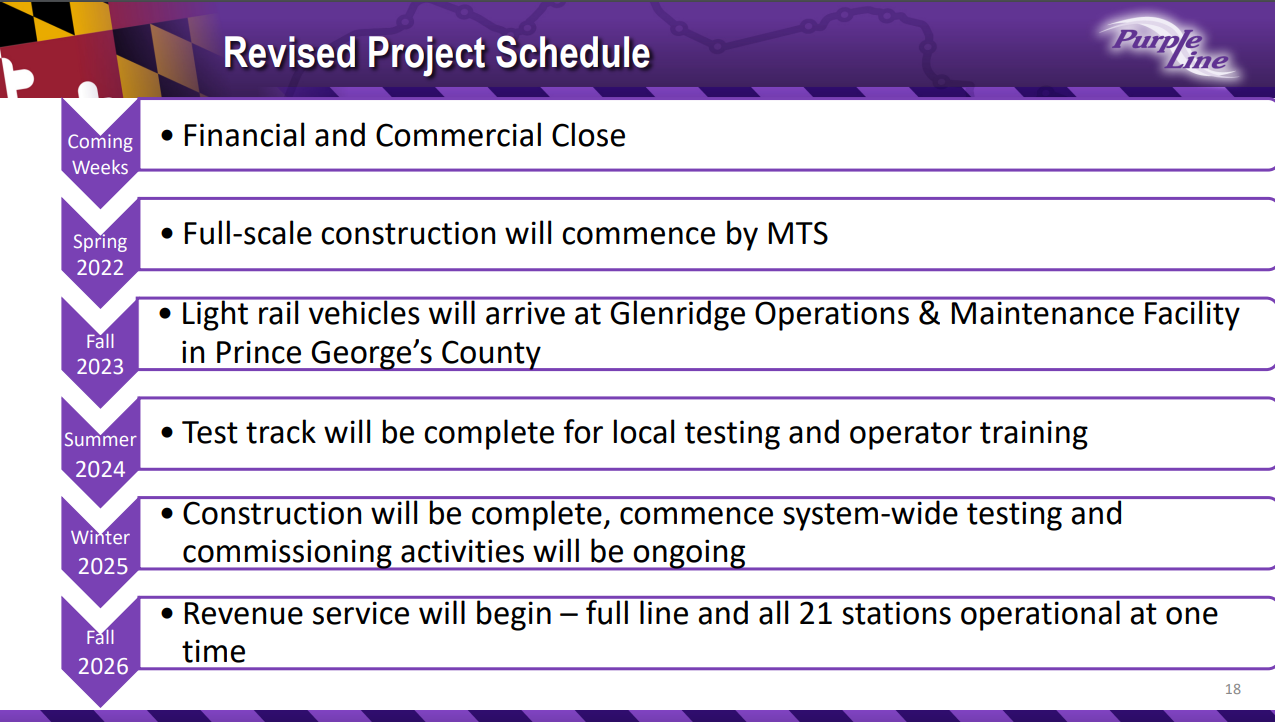 Coming Weeks: Financial and Commercial Close. (MTA will be continuing its own interim construction activities during initial ramping up period.)

Summer 2024: Test track will be complete for local testing and operator training.

Winter 2025: Construction will be complete, system-wide testing will commence, and commissioning activities will be ongoing.

Fall 2026: Revenue service will begin – full line and 21 stations will be operational at one time (not planning for a phased approach.)

Below is the highlight of two questions the Council asked of the MDOT MTA representatives -- they are questions we get asked a lot, too!

Mr. Pollack said a number of things have been done to help move the teams move forward and adapt lessons learned from the previous experience. Some of those initiatives are that a more robust dispute resolution process has been put in place which not only covers use of a dispute resolution board, but also “beefs up our partnering efforts to try and avoid those disagreements from becoming disputes in first place.”

Pollack continued, “We’ve also changed the contract language that removes the clause that allowed the prior contract to unilaterally walk away from the project without going through the full dispute process -- and that’s probably the bigger thing we did on legal side of the arrangement.”

You can listen to the entire briefing here.