It goes without saying that 2018 was a historic year for the Purple Line. It marked the first full year of construction and it included some major milestones for the project. When the year began, you might not have seen any visible signs of construction, but by year’s end, construction activity could be found at just about every future station area and places in between.

As has become our tradition, we're ringing in the new year by taking a look back at the year that was 2018 and the stories that defined the Purple Line. However, unlike previous years, this year's biggest stories were all construction-related and the stories of 'will it or won't it be built' are a thing of the past. So sit back and revel in the progress that was made in 2018! Road closures are fact of life with large infrastructure projects such as the Purple Line. One such closure went into effect this past year in Prince George's County along Ellin Road which leads to the future New Carrollton station. The first phase of construction on Ellin Road will consist of utility relocation. Subsequent phases will include construction of the track foundation, road reconstruction, and installation of electrical systems. As of early January, the pavement had been milled (i.e. removed) in preparation for further construction work.

While not directly related to the construction of the Purple Line, our next story from 2018 is no less significant for future of the corridor. In the waning days of 2018, the Federal Transit Administration announced that the Maryland Transit Administration and the Purple Line Corridor Coalition (PLCC) were awarded a $2 million grant for planning work that will support the goals identified by the PLCC. In short, the grant will help to ensure the investment in the Purple Line leads to equitable, sustainable, and vibrant development along the corridor. Expect to hear more about the PLCC and their work in the coming months. 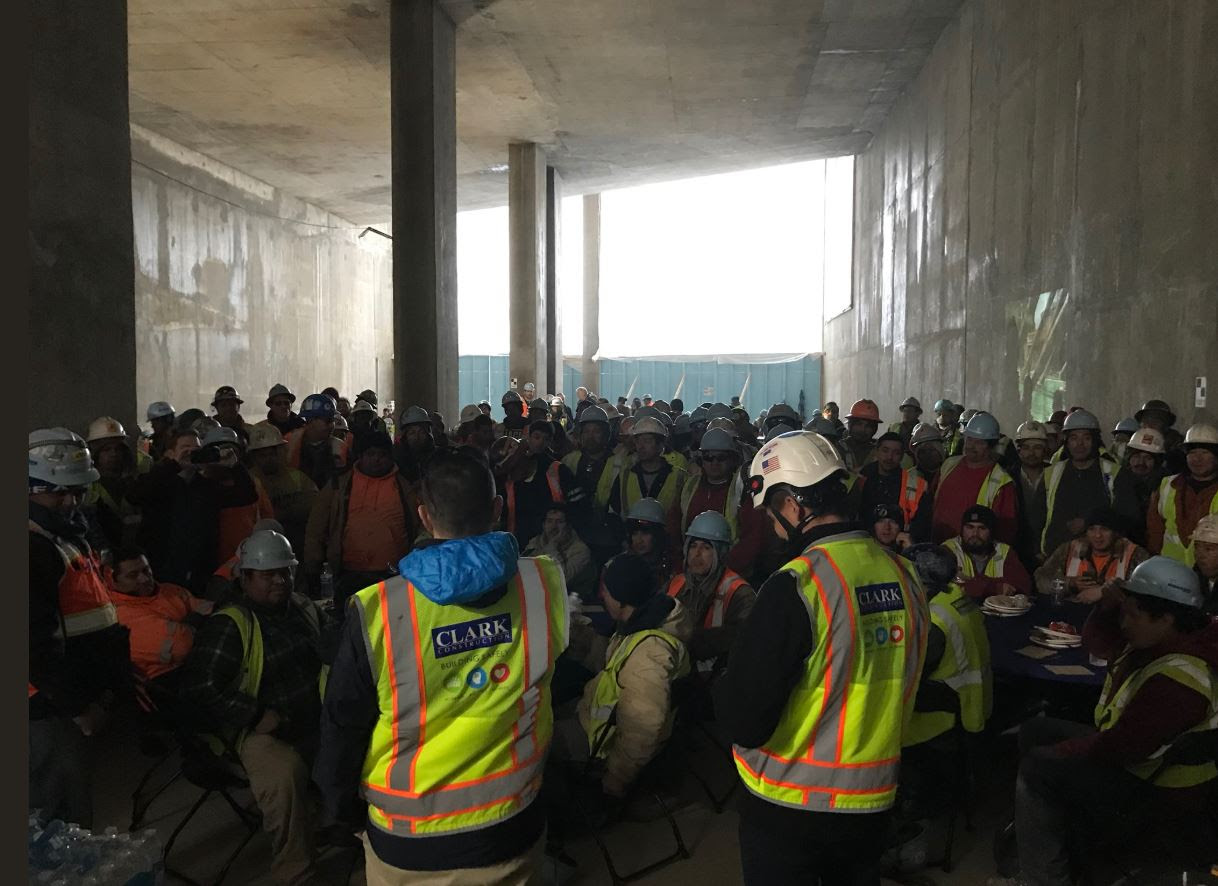 Almost one year after the Purple Line broke ground, another groundbreaking was celebrated in Bethesda for a private development that will sit atop the Bethesda Purple Line station stop and the Capital Crescent Trail. The developer of the residential and office buildings was responsible for constructing the shell of the station as well as the segment of the trail that lies below the buildings. Last month, the construction teams commemorated the completion of the station shell by handing out Christmas ornaments to all the workers who played a part in its construction.

Demolition was a prominent part of the construction activity in 2018. No where was this more apparent than the demolition of the popular Spring Center shopping center in Silver Spring. During the summer and fall, crews worked to knock down the two strip centers along 16th Street. As we noted in a previous newsletter, the demolition was necessary because the site will serve as a construction staging area and because the future Woodside station stop will occupy the back of the property. If you patronized the businesses that used to be located here, you’ll be interested to learn that many of them have found new locations in and around Silver Spring. 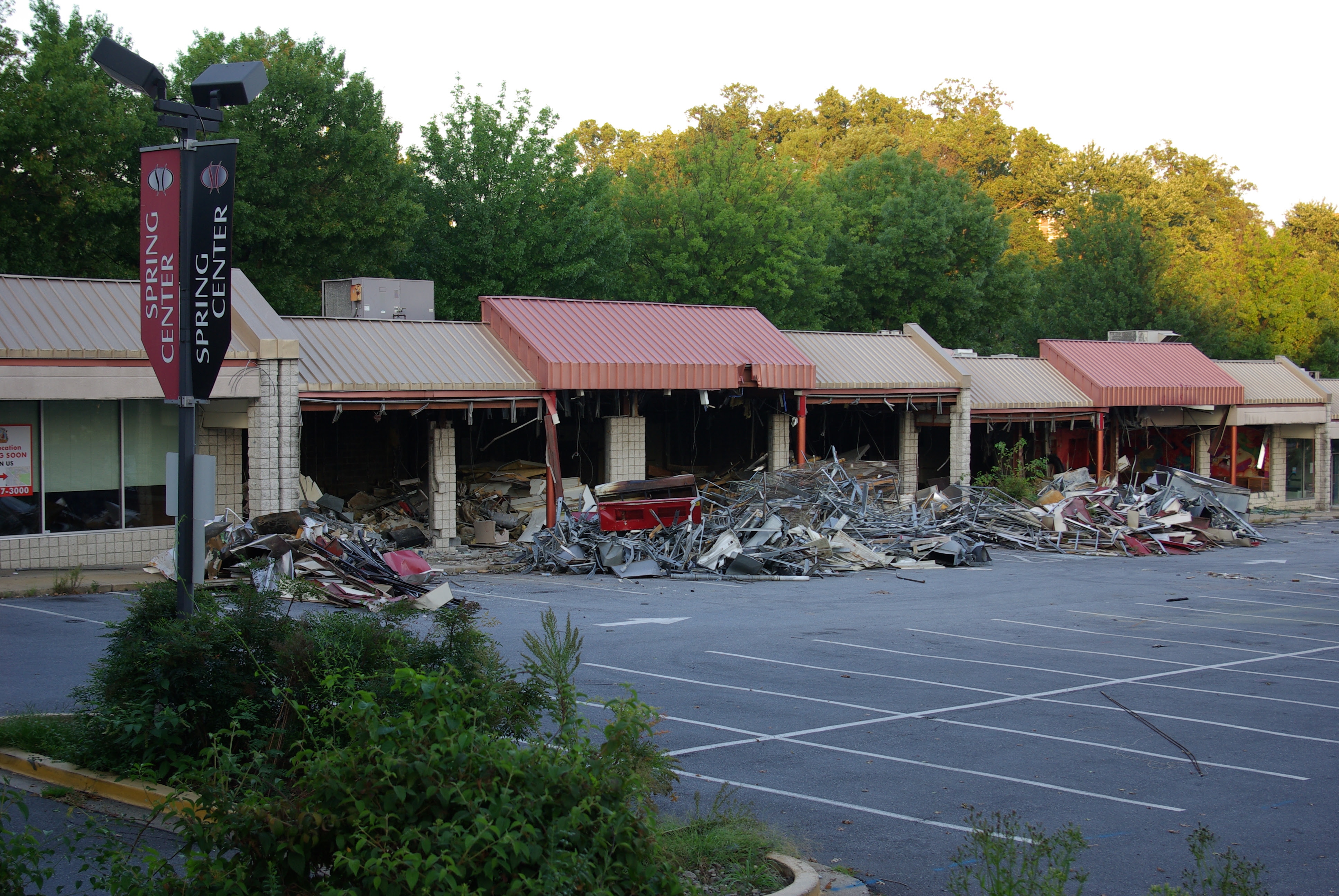 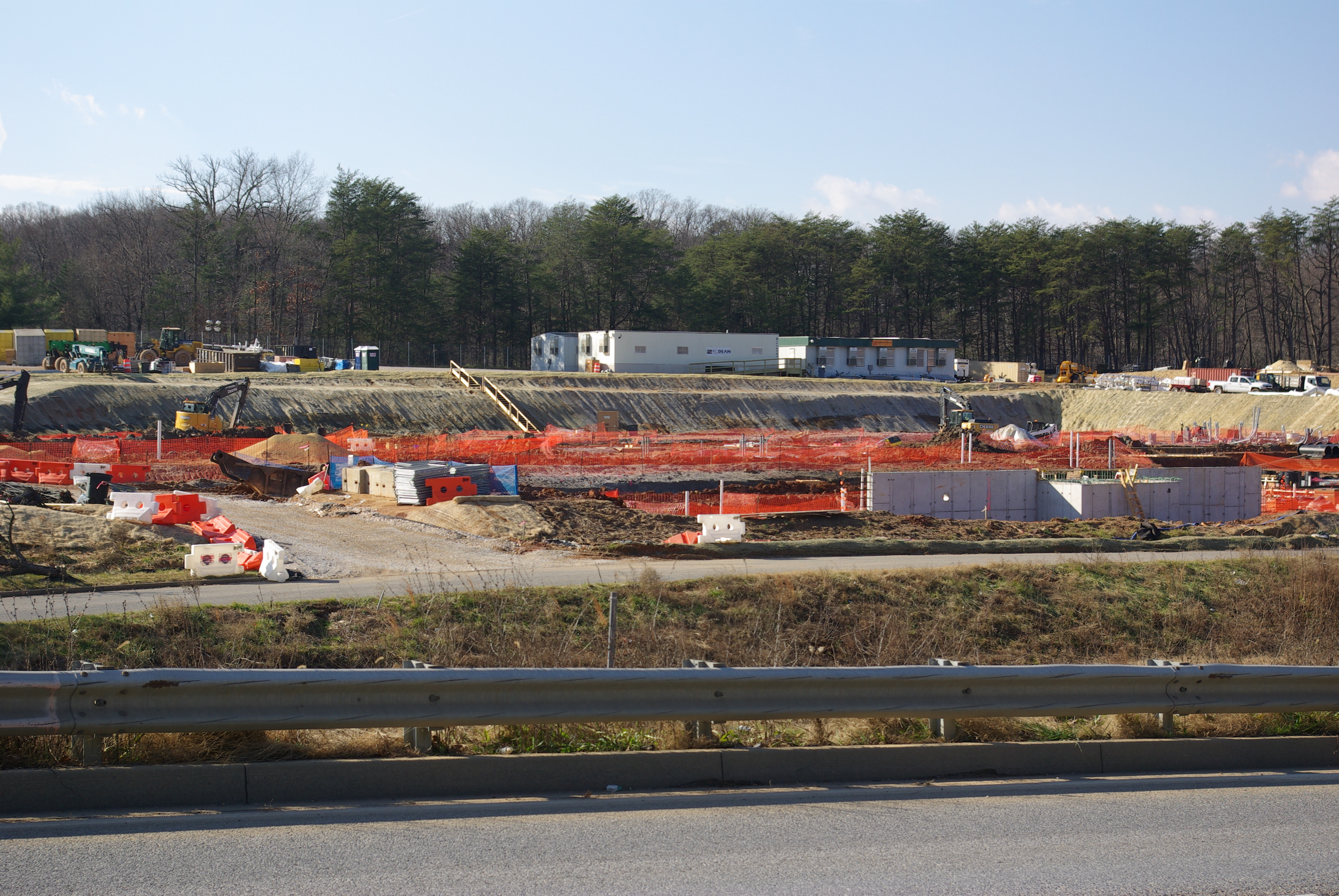 Without a doubt, the largest construction site along the Purple Line corridor is the Glenridge operations and maintenance facility in Prince George’s County, so we couldn’t NOT recognize it on the top ten list! Construction is largely out of public view due to its location, but serious progress was made this year. Construction crews spent the better part of the year moving earth on the site and grading the land for the storage yard; however, by the end of the year, we began to notice structures rising from the ground. Don't be surprised if the Glenridge Yard makes it on next year’s list, too, given the sheer immensity and activity at the site.

In September, the shell of the Purple Line train cars arrived at the Port of Baltimore from Spain, where the frames are being manufactured. The train components were then transferred to Elmira, New York, where the trains will be assembled. There’s an outside chance that by the end of this year, you might just see trains being run on a test track near the Glenridge facility. 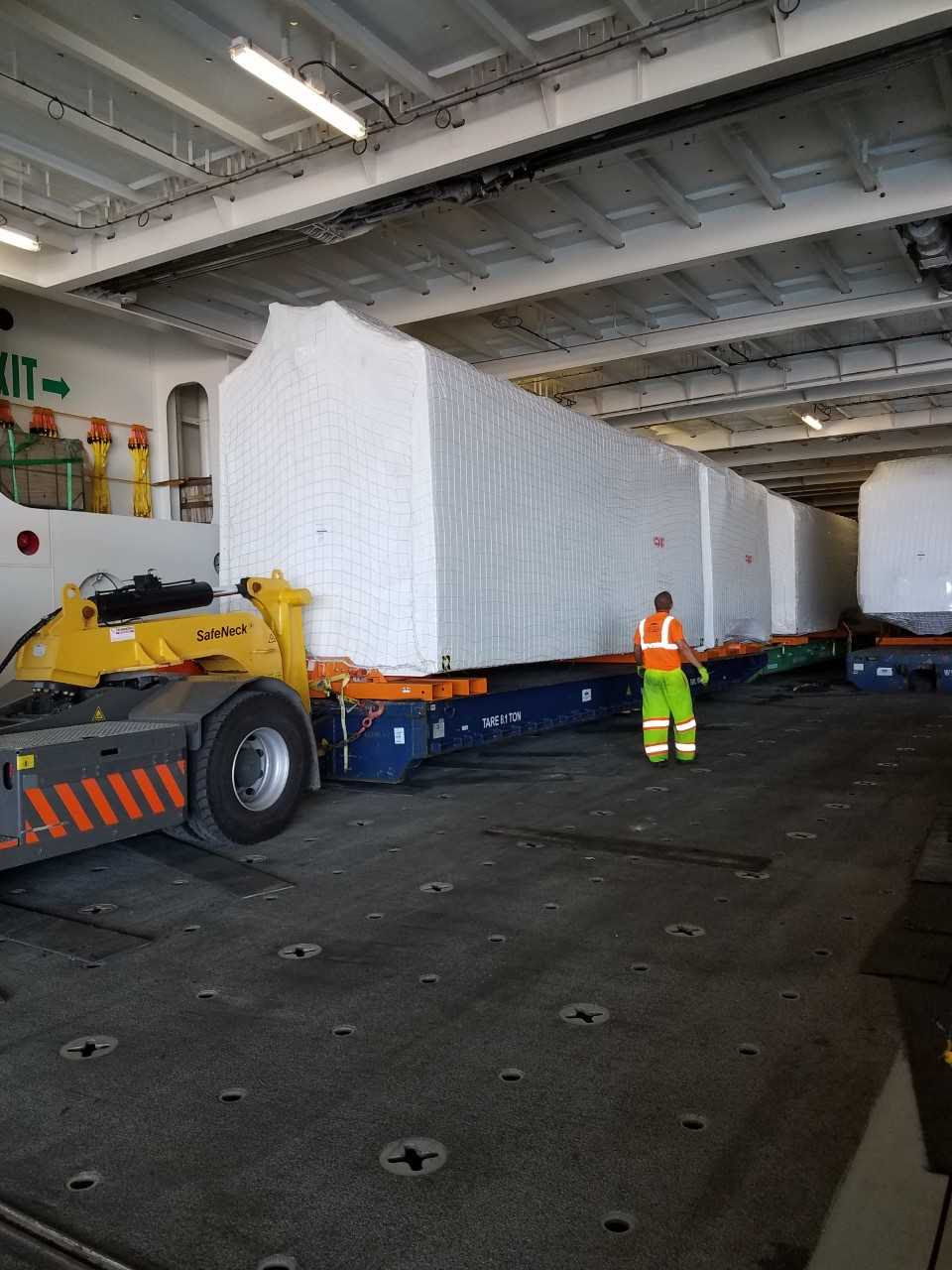 The commencement of major construction at the University of Maryland coincided with the start of the fall semester. In late August, Campus Drive, which runs through the heart of campus, permanently transitioned to a one-way road in order to accommodate the forthcoming construction of the Purple Line tracks that will line either side of the road. Crews are currently in the process of relocating utilities along Campus Drive.

The Construction of the Plymouth Street tunnel in Silver Spring made headlines this fall when residents complained that overnight work on the tunnel was keeping them up at night. Residents sought relief directly from the Secretary of the Maryland Department of Transportation, who obliged the request of the homeowners. Following the meeting with the Secretary, residents reported that the noise had subsided substantially and that they could sleep once again.

The closure and replacement of the Lyttonsville Place bridge was a major story for the second half of 2018. As you may remember, in June, the bridge was closed to facilitate the construction of a new and longer bridge to enable Purple Line trains and the Capital Crescent Trail to run beneath it. The closure was expected to last six months, but Purple Line Transit Partners (PLTP) announced in late December that due to an exceptionally wet fall and the use of a higher strength concrete for the deck which will necessitate an additional surfacing stage, the bridge would miss its targeted completion date. However, PLTP issued an update yesterday that the bridge will reopen to vehicular traffic and pedestrians on or around this Friday, January 11.

1. Light at the End of the Tunnel

The Plymouth Street tunnel holds the distinction of being the only segment of the project to make it on the top ten list twice this year! Construction workers received an early Christmas present on December 20 when they broke through the western end of the 1,000 foot tunnel in Silver Spring and saw daylight for the first time. The “hole through” as it’s referred to by tunnelers, is a HUGE milestone in the project's construction, but excavation work isn’t over just yet. The first pass created the top two thirds of the tunnel, but workers will now begin to work their way back towards the eastern portal and excavate another several feet from the floor of the tunnel.

Last Chance to Reserve Your Seat!

We have a few seats left for tomorrow evening's Purple Line Update Forum in College Park. If you haven't already done so, please RSVP TODAY - the event is free, but space is limited and we need your name on the attendance list as seating will be limited to the first 100 folks with reservations.

The event is tomorrow night (Thursday) January 10 at City Hall! Parking at the building is free, but you must come into the lobby to get your parking pass.

We have an AWESOME program planned - jam-packed with terrific speakers who will highlight the economic development occurring in College Park and update us on plans as the project becomes a reality.

A few things to know about the evening:

• We will have a Meet and Greet from 6:30 pm - 7:00 pm. Because of the number of speakers on our panel, we will start the program portion of the evening promptly at 7 pm.

Speakers for the forum include:

As you can see, this is going to be a very informative evening for the community and we hope you will join us!
Media is invited and inquiries can be made to Christine Scott,[email protected].

Purple Line NOW exists only on donations from individuals and businesses who care about the Purple Line - we don't have corporate underwriters and we are not funded by any government entity. Because of your generosity, we are able to bring you information-packed newsletters, educational and informative programs like the one above, and provide a conduit for community issues regarding the project to the folks who can help solve them. We do a lot on a very skinny budget and volunteer elbow grease! If you've benefited by our services or enjoy the information we bring to you, we hope you will consider becoming a sponsor of our programs.

Every penny is important to us and we appreciate all levels of sponsorship! Please consider joining your neighbors and friends who proudly support Purple Line NOW. Your name will appear at all events and on all promotional materials for a year following your donation. The benefits of sponsorship are listed on our website and donating is easy - just follow this link: I'd like to become a sponsor!

We are grateful for you and all you do for the communities in which we live and work.