As we close the book on 2017, it’s time once again for our annual look back on the Purple Line stories that made headlines over the last 12 months.

When the ball dropped on 2016, the Purple Line was stuck at the metaphorical station. The federal lawsuit brought by opponents of the Purple Line was languishing in Judge Richard Leon’s court with no end in sight. However, by the end of the year, we would find ourselves celebrating the long-awaited groundbreaking and the first signs of construction would be visible throughout the corridor.

2017 will mostly be remembered as the year the Purple Line finally broke ground, but there was so much more that happened this year. Here’s a look back on the stories that made news in 2017:

2017 ended on a high note for the Purple Line with the U.S. Court of Appeals hearing arguments in the lawsuit which had prevented the project from moving forward for more than a full year. And last week, the court reversed District Court Judge Richard Leon's order requiring more environmental review of the Purple Line. Opponents of the Purple Line could always appeal to the Supreme Court, but it appears unlikely that the court would agree to take up this matter. We at PLN are relieved to put this lawsuit behind us, but we must remain vigilant because this may not be the last effort to derail the project before it opens for service in 2022.

It goes without saying that the Purple Line holds enormous potential to bring about economic, social, and environmental benefits across our region, but as with any large infrastructure project, it also has the potential to cause unwanted change, such as gentrification or displacement of residents and businesses. For that reason, in late November, leaders from Montgomery and Prince George’s counties, as well as other stakeholders in the Purple Line corridor, gathered together in College Park to formally sign the Purple Line Community Development Agreement. The agreement seeks to mitigate any negative impacts of the Purple Line and to leverage the once in a generation investment to provide economic opportunities for all, preserve and increase affordable housing, and sustain small business growth. While non-binding, the agreement represents a voluntary commitment by the various parties to achieve the maximum possible benefits for the people who live and work throughout the bi-county corridor.

8. Preserving a Historic Bridge in Lyttonsville

The Purple Line will require the construction or reconstruction of several bridges, but there was one bridge in particular that made headlines in 2017. A nearly 100-year old wood and steel bridge in the Lyttonsville area of Silver Spring was slated to be demolished and replaced with a new bridge as part of the Purple Line project, but this past spring, the bridge gained new attention as residents urged officials to preserve the bridge in some form because of the history behind it.

During the segregation era, Lyttonsville was mostly disconnected from the surrounding community until the Talbot Avenue bridge was put into place in 1918. The bridge holds meaning to many residents because it represented the first link between their historically black community and white neighborhoods where they were allowed to work but not live. It remains to be seen where and how the bridge will be displayed once it is removed, but the good news is that the state has pledged to relocate it to another site nearby.

7. Suspension of Key Work on the Purple Line

The absolute low point in 2017 was when Maryland Secretary of Transportation Pete Rahn was forced to suspend key design and pre-construction work on the Purple Line due to the uncertainty created by the continued litigation. The delays caused by the lawsuit were costing the state more than $13 million a month, and the state could no longer afford to pay Purple Line Transit Partners to work on the project without a clear sense of when construction could begin. Secretary Rahn warned the public that the state would have no choice but to suspend the project if the lawsuit wasn’t resolved by June 1. To make matters worse, if the lawsuit wasn’t resolved by August 1, the state would have to consider canceling the project altogether. Thankfully, that never came to pass as the suspension of work was lifted one week before August 1 deadline, as you’ll read more about further down the list.

If there was any silver lining to the year-long delay that plagued the Purple Line, it was that it enabled a building on a key site in Bethesda to be razed, clearing the way for an improved station stop. As you may recall from previous top ten lists, in order to keep the popular Capital Crescent Trail underground in Bethesda and realize the original vision for the Bethesda station, the office building at the corner of Wisconsin Ave and Elm St, aka the Apex Building, would need to be torn down before construction on the Purple Line commenced. The final pieces of the puzzle fell into place during 2017. In August, a historic structure that was also on the property was moved just down the road, and in November, the Apex building began to come down, bit by bit. As a result of the building’s demolition, the Purple Line will feature an enhanced entrance on Wisconsin Avenue, wider station platforms, as well as an underground link to the Capital Crescent Trail.

5. Closure of the Georgetown Branch Trail

Shortly after the groundbreaking ceremony in late August, the state announced that the popular Georgetown Branch Trail would be closed to the public for four to five years beginning on September 5 in order to facilitate construction of the Purple Line. The news caught some users of the trail by surprise; however, the state maintained that the immediate closure of the trail was needed because the right-of-way had to be cleared of obstructions before any other work could proceed.  Opponents of the Purple Line filed suit to block the tree-cutting, but Judge Leon rejected their request and clearing of the Georgetown Branch right-of-way began in earnest on September 25.

4. Judge Leon and the waiting game

The first half of 2017 was defined by the interminable legal proceedings in Judge Leon’s courtroom. As you may remember, in late 2016, Judge Leon called into question the accuracy of the state’s ridership projections for the Purple Line, citing Metro’s declining ridership and its much-publicized maintenance issues as reasons to doubt the forecasts. Subsequently, the state and the Federal Transit Administration provided analysis to Judge Leon which showed that even if the Purple Line received zero transfers for Metro, it was still worthy of constructing and of receiving federal aid. However, Judge Leon was not persuaded by the new data and the lawsuit continued to languish in his court until the U.S. Court of Appeals stepped in.

August is usually a slow month in the Washington region, but it was anything but for the Purple Line. Four weeks after the appeals court issued a stay on Judge Leon’s ruling, the Department of Transportation announced its intention to provide federal funds for the Purple Line, $900 million to be exact, which was the last piece of the funding package. Several days later, the full funding grant agreement was formally inked by Secretary of Transportation Elaine Chao and Governor Hogan at the groundbreaking ceremony in Prince George’s County.

In July, the U.S. Court of Appeals issued a stay on the lower court’s ruling, thereby restoring the project’s record of decision (i.e. federal approval) and making the project eligible for federal funding once again. Following on the heels of the stay, the state worked quickly to secure a full funding grant agreement with the federal government, so construction could finally begin. Which brings us to our number one story of 2017…

As you probably could have already guessed, the number one Purple Line story in 2017 was the long-awaited groundbreaking for the project. Nearly 31 years after the Purple Line was first conceived of, ground was finally broken on the project in late August at the site of the future Purple Line maintenance facility in the Glenridge neighborhood in Prince George’s County. Governor Hogan even got into the action by hopping into an excavator to knock down an old industrial storage shed to make way for the Purple Line. 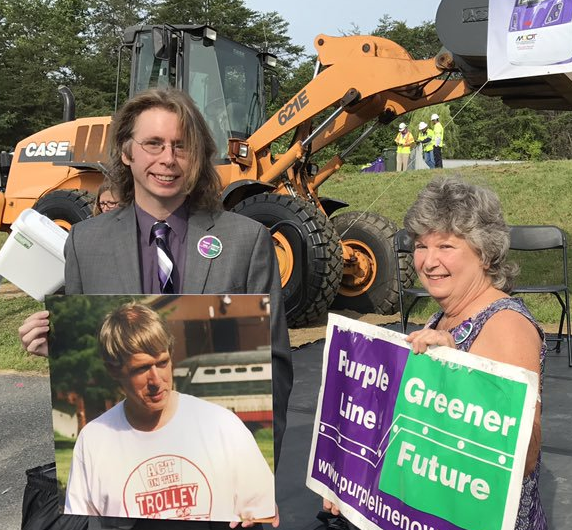 Once all the pomp and circumstance had subsided, we took a moment to remember those who laid the groundwork for this day, but who are no longer with us, including our late co-founder, Harry Sanders. Harry and many others were with us in spirit as we celebrated this historic milestone.