One of the Nation's Best

The Purple Line has been lauded by the nation's largest environmental organization in a report released on December 11, 2012 entitled "Smart Choices, Less Traffic: 50 Best and Worst Transportation Projects in the United States." The Sierra Club identified the 25 projects in the country that would do the most to reduce oil consumption, increase safety, improve public health, and save money for taxpayers and commuters, and also identified the 25 most harmful projects.

The report was released at the site of the future Bethesda Purple Line station. Ethan Goffman of the Montgomery County Sierra Club presented an initial copy to Ralph Bennett, president of Purple Line NOW!. 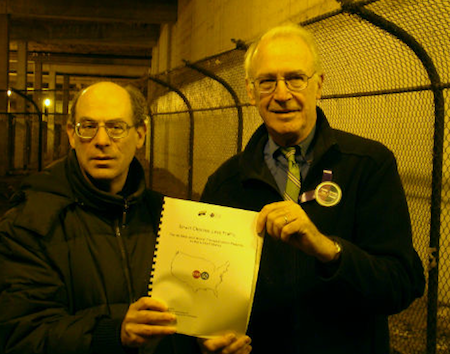 "Climate change is with us, it will get worse, and transit is the best antidote," said Goffman. "If we're serious about fighting climate change, we must build the Purple Line soon."

The new report emphasizes that automobile exhaust and sprawl intensify climate change, harm local air quality, and destroy biodiversity. Because the Purple Line links different Metro lines and is near the core city, it will draw development inward, encouraging revitalization and development where it is most needed. The Purple Line is expected to carry 68,000 passengers per day, replacing an enormous amount of automobile traffic.