We have had such a fantastic response to our second forum coming up this Thursday, April 21 that we have now closed registration as all of the seats have been reserved. If you are not sure if you have a reserved seat, contact us immediately so we can check for you. Unfortunately, due to fire marshal constraints and the size of the venue, we are unable to accommodate walk-ins, however, we are planning to tape the event, so check the Purple Line NOW website following the forum for a link to the event.

We do have a waiting list, so if this has been on your calendar as a tentative event, please contact our executive director Christine Scott ([email protected]) so she can add your name to the waiting list. We will let you know if any space becomes available as the event nears.

Thank you for all of your support of Purple Line NOW through the years. We have two more forums planned over the next few months and will let you know as soon as registration is open for those events.

A Purple Line Update - Where Are We Now? What Comes Next?
An overview from the state and counties' perspectives of the next steps for getting the project built - including an explanation of the Public Private Partnership and what it means for the Purple Line

THANKS TO OUR FORUM SPONSORS

Residents, businesses, and stakeholders located near the new transit line’s route are hungry for information about the Purple Line project. Over the next twelve months, PLN will host an informative and innovative series of individual forums led by leading experts in their fields. The varied topics will provide useful information to those impacted by the line, and a path forward as the project gets ready to break ground in 2016!

The second forum, A Purple Line Update - Where Are We Now? What Comes Next? will be held on April 21 from 6:00 pm - 8:00 pm at Montgomery College Cultural Arts Center, Second Floor - George & Ruth Tretter Dance Studio, 7995 Georgia Avenue, Silver Spring, 20910, however we currently we have a waiting list. If you haven't RSVP'd and would like to attend, please contact Christine Scott and we will add you to the waiting list should space become available.

We are thrilled to announce that Maryland's Secretary of Transportation Pete Rahn will be our keynote speaker! WAMU's Transportation Reporter Martin DiCaro will moderate the forum and the panel will include Charles Lattuca, Maryland Transit Administration, Executive Director for Transit Development and Delivery, Montgomery County Councilmember George Leventhal, and Qingbin Cui, Associate Professor of Civil Engineering at the University of Maryland, College Park.

On Thursday, members of the Board of Public Works (Governor Larry Hogan, Treasurer Nancy Kopp, and State Comptroller Peter Franchot) voted unanimously to approve the $5.6 billion contract. The Governor cited the line's role as an economic catalyst and Comptroller Franchot revealed that one of the reasons he supports the line is that it is one way to "tackle inequality as it connects communities with jobs," citing as an example the challenge of commuting by bus from Langley Park to Bethesda. 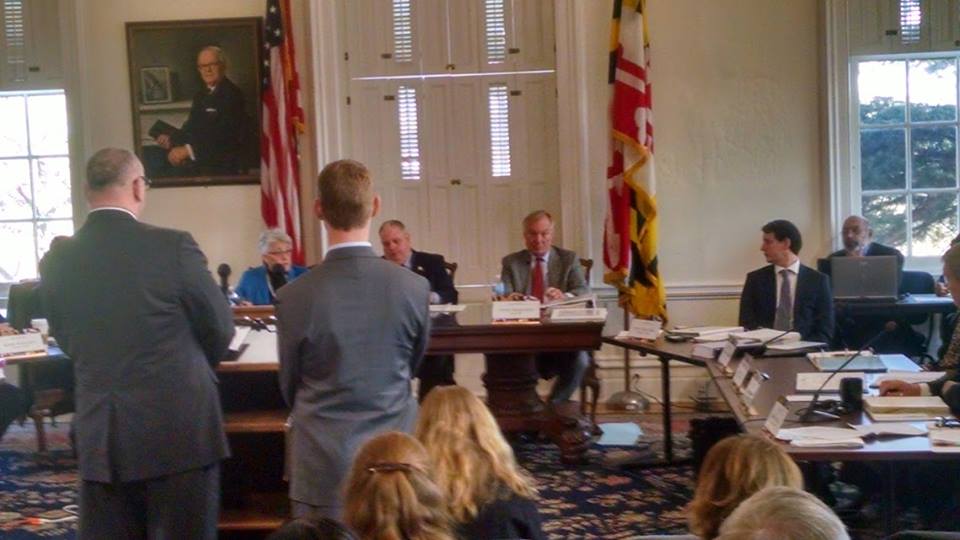 "This is an exciting day as the project has cleared another hurdle and had its financial bonafides verified. The hearing itself also was a valuable opportunity for both the Board of Public Works members and the Maryland Department of Transportation and Maryland Transit Administration representatives to explain the benefits of the project and to address the concerns of its critics," says Purple Line NOW's Vice President Greg Sanders who was at the State House in Annapolis for the decision this morning.

What does this mean and where do we go from here?

The next step will see Maryland's Department of Transportation working to finalize the full funding grant agreement with the Federal Transportation Administration (FTA). In doing so, the project will then be able to break ground later this year! It is expected the first riders will board the Purple Line in Spring of 2022. More information about next steps can be found in Martin Di Caro's report: Maryland Wraps Up State-Level Approval Process For Purple Line.

Finally, Purple Line NOW wants to thank all parties that had a part in marking this important milestone: from Governor Hogan, his Secretary of Transportation, Pete Rahn, BPW members Nancy Kopp and Peter Franchot, to our terrific Prince George's and Montgomery County Executives, State and Federal Delegations, and County Councils, the newly named concessionaire Purple Line Transit Partners, our devoted and active Purple Line NOW Board and Team, and all of the hundreds of transit advocates who have worked so hard over the past 30 years to get us to this point.

Now, on to closing the contract and the FTA!

P.S. We hope you have already signed up for our April 21 forum entitled "Understanding the Public Private Partnership" at which Secretary Rahn will be keynoting! We are almost at capacity (there is limited space), so if you have not yet reserved your seat, please take a moment to do so.

2016 is shaping up to be an banner year for the Purple Line. The private concessionaire was announced last week, the full funding grant agreement will be signed with the federal government and, fingers crossed, the project will finally break ground. As we near these important milestones, we here at PLN wanted to facilitate a community wide discussion on the issues that we think will define this year through a series of forums we’re calling “Envisioning the Purple Line.”

Our first forum, held on February 22 in College Park, was devoted to, what else, College Park! College Park has a quarter of all the Purple Line stops and will undoubtedly be one of the biggest beneficiaries of the project. The forum brought together leaders from the university, housing industry, City of College Park, and student body to talk about the impact the Purple Line will have on the university and the greater College Park area. You may have seen WTOP’s coverage of the event, but if you didn’t, click on the link to see what you missed. 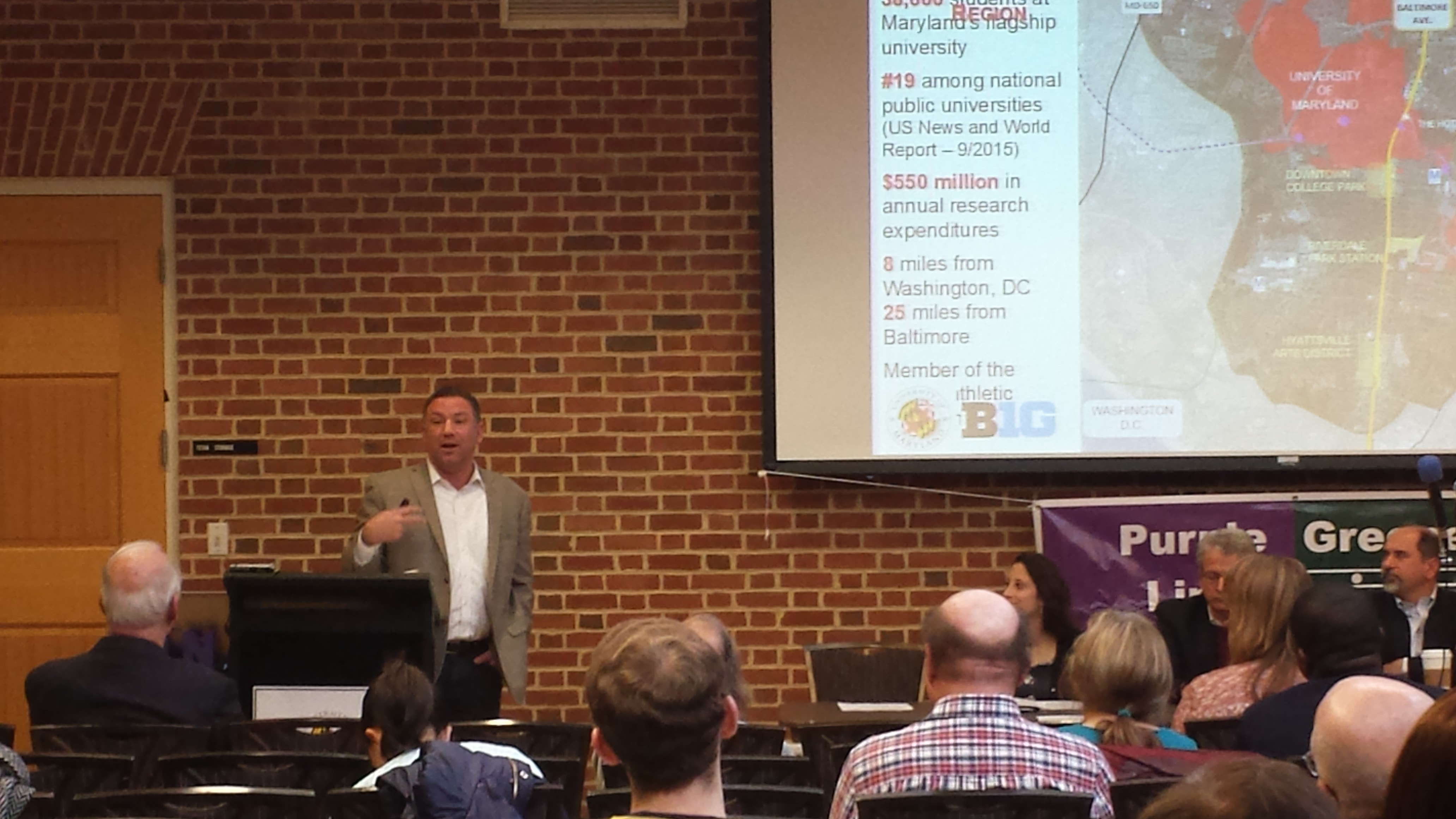 The biggest news to come out of the event was the announcement by University of Maryland officials that there will be a “fare-free zone” between the Adelphi Road/West Campus station and the M Square stop just south of the College Park Metro station. The fare free zone will enable students and faculty with a University ID to ride the Purple Line for free, not to mention reduce the time it takes to traverse the sprawling campus.

Students and university officials noted that the Purple Line will have the added benefit of freeing up shuttle buses that were formerly used to transport students from the College Park Metro station to the main campus, and vice versa. The buses can then be redeployed to new or existing bus routes, thereby spreading the operating benefit of the Purple Line to other corridors and students, who might not otherwise have a viable transit option.

Another major topic of the forum was how the Purple Line will support efforts to revitalize College Park. The conversation around redevelopment in College Park is usually centered around Baltimore Ave. (formerly Route 1), but Ken Ulman, Chief Strategy Officer for Economic Development at the university, focused attendees’ attention on another part of the city with big plans for redevelopment once the Purple Line is built, the M Square Research Park. Many people are unaware that the University has a world-class research park just outside the main campus near the College Park Metro station. M Square was even recognized by the Association of University Research Parks last year as the top university research park in the country. It currently hosts several federal agencies and a number of university programs and centers, but in the future, it will transform from a 20th century office park into a more vibrant area with new residential, retail and recreational opportunities. The Purple Line will unlock the full potential of M Square by seamlessly connecting the research centers at M Square to the academic buildings of the main campus, and in the process create a more cohesive campus. 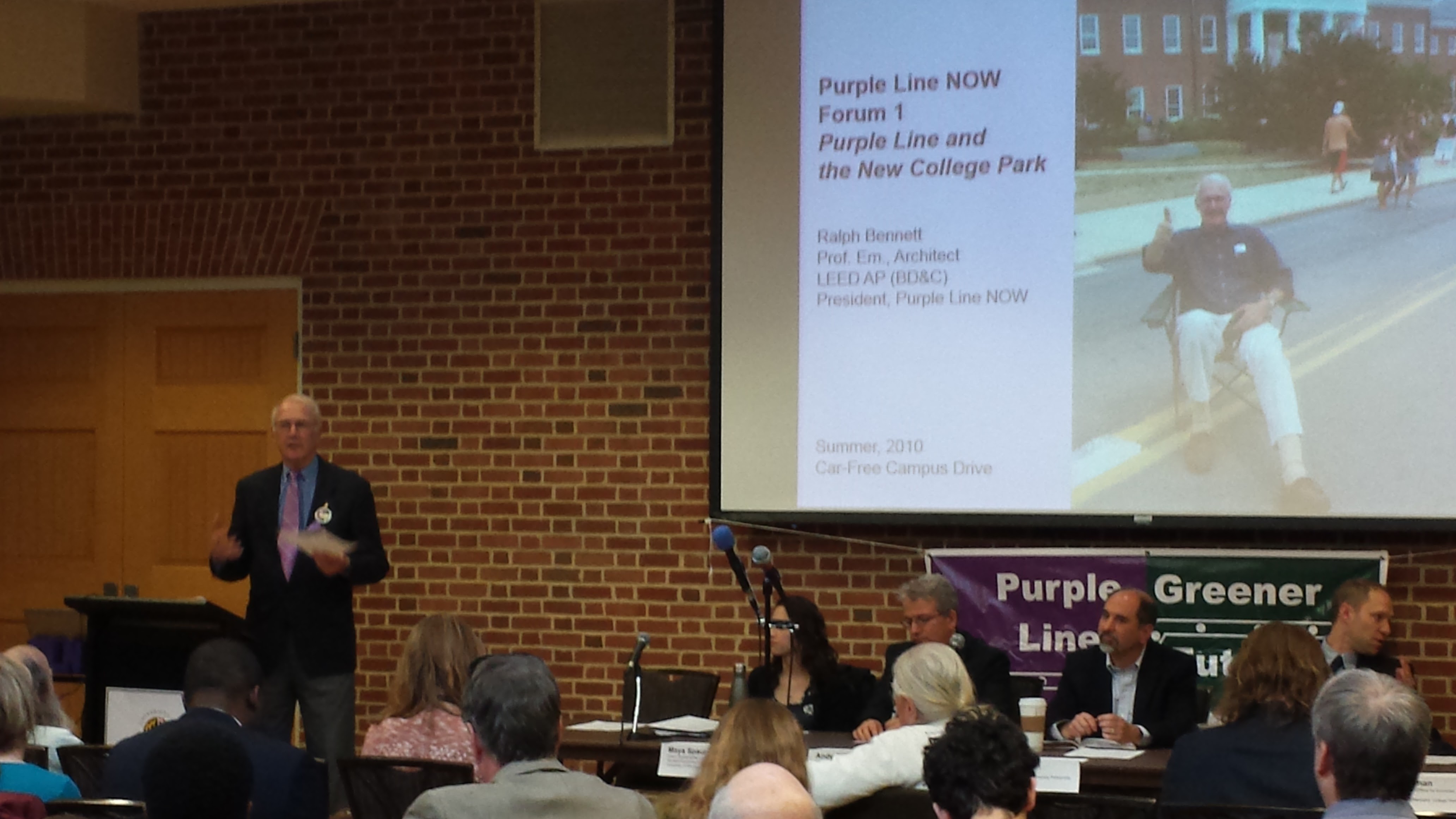 One of the more interesting discussions to come out of the forum concerned the role the Purple Line could play in improving student access to grocery stores. Many of us take grocery shopping for granted, but it's a non-trivial concern for students at UMD, the majority of whom do not own a car. The only nearby grocery options that students have are Target Express, CVS and 7-11, which illustrates why College Park has been classified as a "food desert" by the USDA. The nearest full-service grocery store is more than two miles from campus, and it’s exceedingly difficult to reach it via transit. A representative of the Student Government Association described how most students are faced with taking a 1-hour shuttle bus ride to the grocery store or asking a friend for a ride in order to do their grocery shopping. For students who don't own a car, the Purple Line will make a simple errand like grocery shopping simple again. 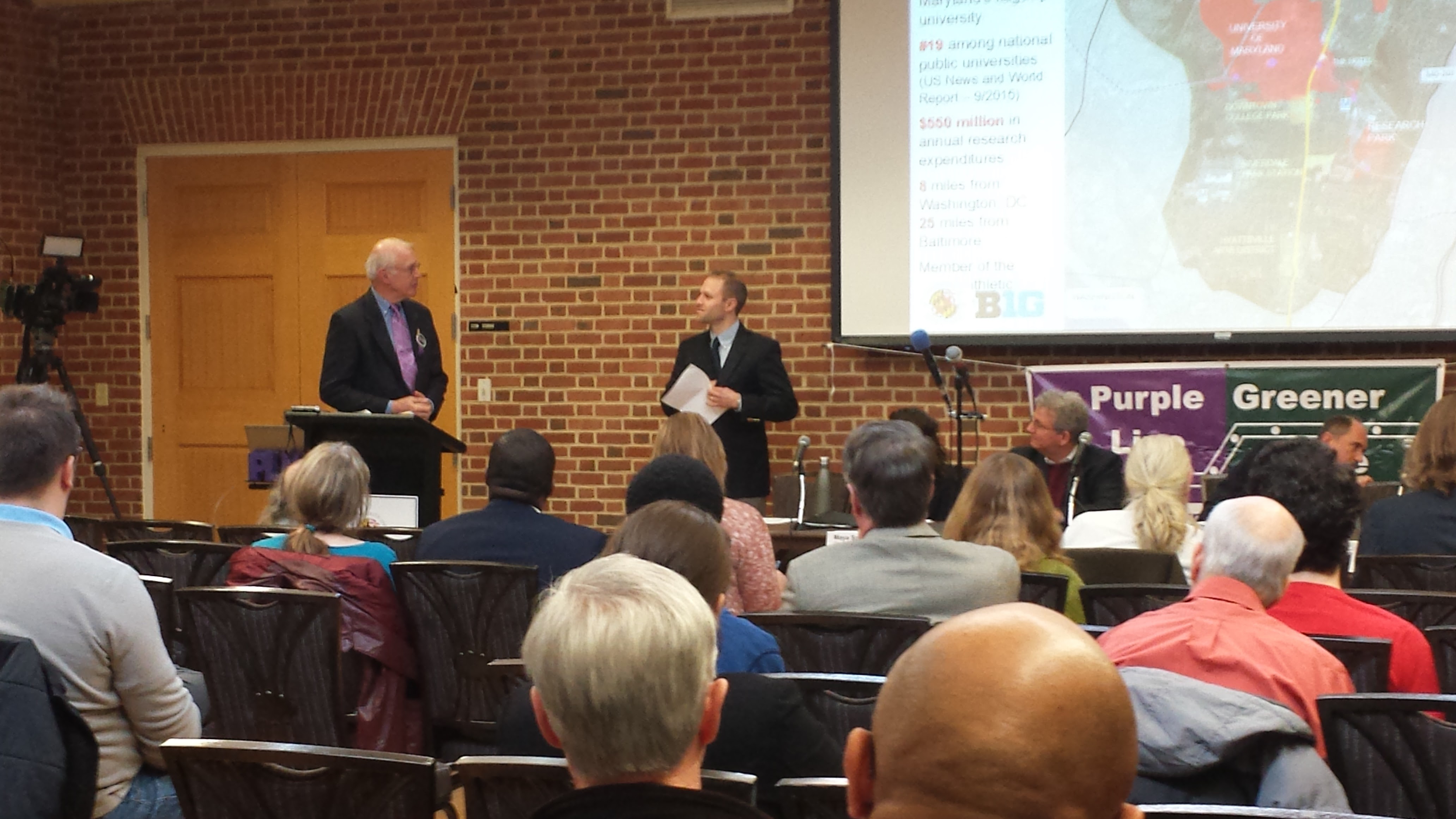 Affordable housing and improving the variety of housing types rounded out the topics covered by the panel. Students voiced concerns about the already high costs of off-campus housing and the need to keep housing affordable once the Purple Line is up and running. Non-students, on the other hand, expressed hope that the Purple Line would help diversify the city’s housing stock. Most of the housing being built in College Park is geared towards students, but the panelists observed that the Purple Line could spur the development of market rate housing that is attractive to graduate students, young professionals and families who want to live near transit.

All in all, the first forum confirmed that big changes are in store for College Park. Thanks again to our panelists and sponsors for helping make this event possible. Our next forum, Understanding the Public Private Partnership - An overview of the next steps for getting the project built, will be held on April 21 at Montgomery College in Silver Spring. Maryland Transportation Secretary, Pete Rahn, will be among the speakers at this event where we’ll demystifying the P3 arrangement. Final details regarding the exact time and location of the meeting are still in the works, but be sure to save the date! You can RSVP right now (the event is free, but you must reserve your seat in advance.)