On January 10, Purple Line NOW held an informative forum for the College Park community. We were thrilled to welcome so many of you on a cold winter’s night. In case you were not able to join us, we will put the forum up on YouTube soon, thanks to our volunteer videographer, John Wetmore.

In the meantime, here is a short recap of the evening’s presentations. 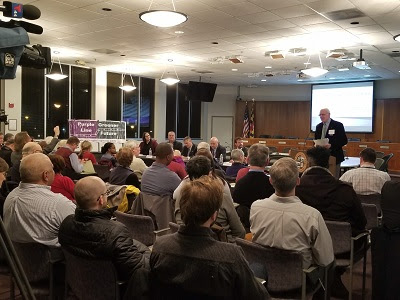 Below each recap, you can see a short bio of the speaker. They were all terrific!

Mayor Wojahn welcomed everyone to City Hall and spoke about some of the opportunities and challenges facing the College Park community as the Purple Line rolls into town. One of the most visible developments as a result of the light rail project coming to College Park is the completion of the new high-end hotel, with space for academic conferences and events. The new investment in the community brings more people and businesses to the area, which in turn has a positive impact on the tax base. 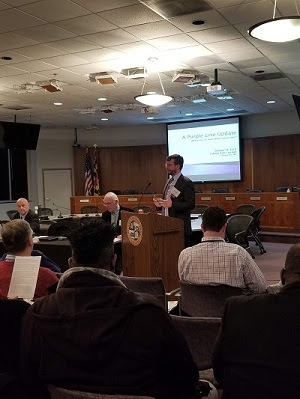 The Mayor also reminded the audience that there will be five FREE stations along the campus portion of the route for students and faculty, allowing for more efficient movement throughout campus and less automobile traffic. Patrick also spoke about some of the challenges construction is presenting with the closure of Campus Drive, although they are trying to focus construction during the summer months when fewer students are around. The Mayor also said that they are working hard to keep College Park affordable for residents and businesses as the line nears completion, "as the goal is not just development and new jobs, but to forge College Park as a community."

The Honorable Patrick Wojahn, Mayor of College Park
Patrick is an advocate for trails and safe bicycle and pedestrian networks as Director of Government Relations at Rails-to-Trails Conservancy. Previously, Patrick worked as a policy and legal advocate for the rights of people with disabilities and for people living with HIV/AIDS in the DC metro area. Patrick has served in various leadership roles in the past, including as Chair of the National Capital Region Transportation Planning Board and as chair of the National League of Cities Transportation and Infrastructure Service Policy Committee. He was a founding member of the Board of Director of the College Park Community Foundation and served on the Boards of Directors of the College Park Community Food Bank and Equality Maryland. Patrick is also a member of the Board of Directors for Purple Line NOW.

Fred said that one of the most important things he does each day is drive from one end of the Purple Line to the other to get an eye on the work being done on the ground (and below!) To illustrate the work being done, he brought an excellent slide show - as soon as we have the video up on the internet, we will give you the link so you can watch it yourself! One of the highlights of the video was watching the underground crew, working in hot, dark, and dangerous tunnels, break through to the other side – cheering and celebrating this milestone for the project. Fred also talked about the fact that the Purple Line will greatly expand job opportunities, giving a geographic reach to those who will be able to easily commute to their jobs.

You may remember news broke the morning of our forum that the project might be delayed and the original cost estimate exceeded. Not one to shy away from bad news, Fred addressed the media report head on, explaining that the year-long lawsuit resulted in the potential time delay and increase in costs, but that his goal is to make up as much of the lost year as possible.

Brad Frome, an advisor to the Prince George’s County Executive, spoke eloquently about his belief that “accessibility to affordable transportation is a human right.” We couldn’t agree more! He said our communities and government owe its residents affordable transit to jobs and education and he believes that the Purple Line project reflects where the state of transportation is going in the future. “Having a light rail network in our backyard,” he said, “is something many jurisdictions would envy!” 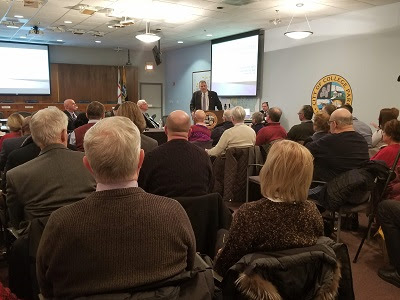 Moreover, the climate action plan will benefit greatly once the project is built – enabling people to get out of their single occupancy vehicles and allow for new development on former parking lots. He gave credit to the University of Maryland’s President Loh who played a big part in getting the University on board with the project in the early days. Brad also talked about the need for blended housing, in addition to separate high income and low income housing.

He said that Prince George’s county has invested a lot in making sure the stations will be focal points of the community with appropriate landscaping and public arts, including redesigning the area around Adelphi station to be an artfully designed and welcoming entrance to the University of Maryland. He also said, "while the county bus service currently ends at 7:30 pm, we are working to change that, though it will be a costly endeavor." Lastly, Brad reminded everyone to support businesses in the community during construction!

Bradley Frome, Senior Policy Advisor for Prince George’s County Executive
Brad Frome was born outside of Philadelphia in 1975 (though he is a steadfast fan of America’s team, the Dallas cowboys). He graduated cum laude from the University of Maryland with a BS in Government and Politics and attended George Washington University Law School. Mr. Frome started in government working for a member of the House of Delegates as a Legislative Director for four years before serving as Chief of Staff to a member of the Prince George's County Council for six years. Mr. Frome joined the Baker Administration as a Deputy Chief of Staff transferring to become an Assistant Deputy Chief Administrative Officer for economic development and public infrastructure in early 2014.

George Trujillo, the Associate Vice President for Facilities Management gave us some background on UMUC – did you know they are present in 20 countries and they are the largest online college in the world with 86,000 students?!

George said since the Purple Line station will be located behind one of the UMUC buildings, he is planning "sidewalks, artwork, and pathways to highlight and create a sense of place for people coming and going from the station." We can’t wait to see plans for that! He also said that every single one of their infrastructure lines runs through campus. 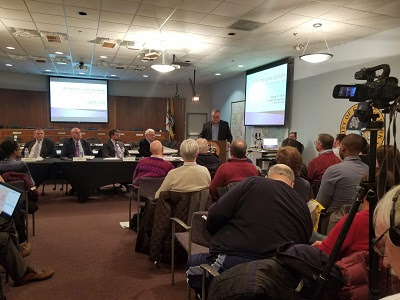 We want to give a special thanks to UMUC which provided Purple Line NOW with a generous sponsorship last year. We are grateful for all they are doing, not just for the College Park community, but for students all over the world.

George Trujillo, Associate Vice President, Facilities Management, for University of Maryland University College (UMUC)
George manages an annual budget of $20 million and oversees construction, maintenance, security, housekeeping, landscaping, and parking for facilities totaling more than 980,000 square feet. He joined UMUC in 2001 after a 17-year career with Emcor Facility Services. He is a 2007 graduate of University of Maryland University College with a degree in Business Management and maintains professional certification/licenses/membership in District of Columbia Steam Engineer 3rd class, Maryland Steam Engineer 1st class and holds a Realtors license in the Maryland.

Anna McLaughlin, Assistant Director of Sustainability at the University of Maryland’s Department of Transportation, wrapped the evening up for us by highlighting the good work she and her team are doing on campus to encourage “smart commuting.” One of those activities is a “pool” party, where people can meet RideShare partners to plan their daily commute. (Bring your cue stick and not your bathing suit for this kind of “pool” party!) 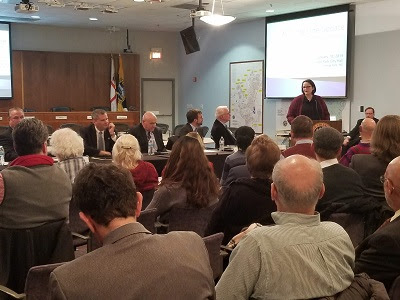 In 2018, Anna said that her team met their goal of reducing parking spaces by 3,000 – well before the Purple Line is scheduled to come to town. They are strategizing ways to encourage students and faculty to get around without driving, including discounted permits for carpools, bike commuter incentives (like discounts on gear, covered/locked places to leave bikes, showers, etc.), and an online platform where commuters can see all the route options available to help with routes and schedules. They are also working on a Parking Cash-Out program which provides a $425 reward at the end of the year for giving up a parking permit. Anna explained, “$425 is so much cheaper than building a parking space!”

On a final note, Anna said they recently put up some transit screens in the Student Union so students can see the many transportation options – and also leave them time for another cup of coffee if they see their bus is not due to arrive for another 20 minutes!

Anna McLaughlin, Assistant Director of Sustainability at the University of Maryland’s Department of Transportation
Anna is responsible for the university’s transportation demand management program. Anna has supervised the launch of the mBike bikeshare program with the City of College Park and established the University’s Smart Commute Program. Prior to joining UMD, Anna was the TDM Coordinator at the District Department of Transportation where she launched a city-wide TDM program and was part of the team that launched Capital Bikeshare.

As you can see, it was an information-packed evening, full of the latest breaking news on the project and lots of highlights about current and future development in and around College Park. There’s even more information on the video, and we will let you know when it is available for viewing. We are already planning the next forum, to be held sometime later this spring.

Stay tuned for an announcement of the next Purple Line NOW forum - coming soon!