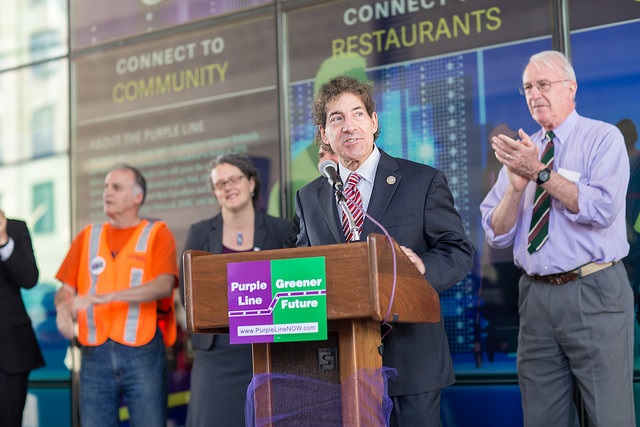 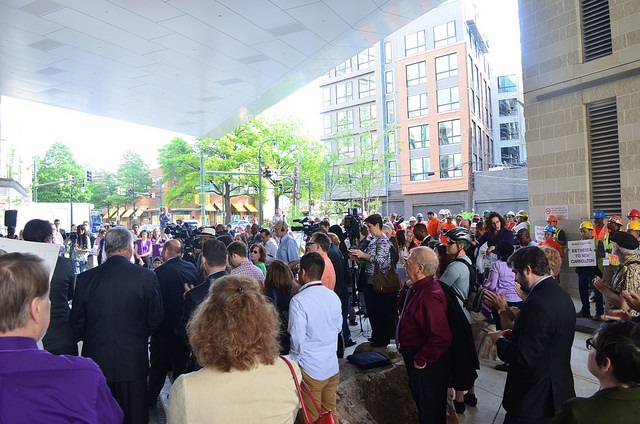 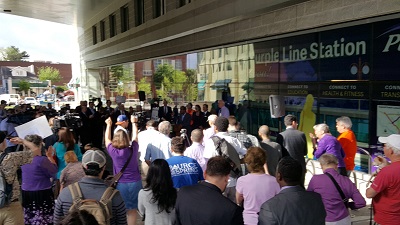 The half-hour press conference will feature Congressman Jamie Raskin, Montgomery County Executive Isiah Leggett, Prince George's County Executive Rushern Baker, Montgomery County Council President Roger Berliner, Prince George's County Council Chairman Derrick Davis, state and congressional representatives, Union members and others. A full list of program speakers will be available the morning of the conference. Elected officials, community groups, unions, and businesses have confirmed attendance. If you have questions or are a member of the media and would like to schedule an interview with organization leadership in advance of or following the conference, please contact Christine Scott at [email protected].

Please join Purple Line NOW for a press conference in collaboration with a strong a coalition of organizations and businesses including Action Committee for Transit, CASA and the Fair Development Coalition, Chesapeake Climate Action Network, Coalition for Smarter Growth, DC Area Ironworkers Movement for Justice, Laborers Local 11, Montgomery, Greater Bethesda and Silver Spring Chambers of Commerce, Purple Line Corridor Coalition, Sierra Club, City of Takoma Park, and Washington Area Bicyclist Association on Tuesday, May 2, 8:30 a.m. in the future passageway for the Purple Line in front of the Silver Spring Library.

The half-hour press conference will feature county officials including both the Montgomery and Prince George's County Executives, county council leadership, and congressional and state representatives and others. A full list of program speakers will be available before the event. Elected officials, community groups, unions, and businesses are expected to attend. If you have questions or are a member of the press and would like to schedule an interview with organization leadership following the conference, please contact Christine Scott at [email protected].

A coalition of 45 business leaders wrote to Secretary of Transportation Elaine Chao last week, urging her to finalize the Purple Line’s $900 million New Starts grant as soon as the project’s Record of Decision is reinstated by U.S. District Judge Richard Leon.

The letter was signed by developers with projects in both Montgomery and Prince George’s Counties, including JBG, the Bozzuto Group, Federal Realty, Carr Properties, and Urban Atlantic. Marriott International, which recently announced the relocation of its headquarters to a new 700,000 square foot “urban campus” in downtown Bethesda, also signed on. In addition, business organizations like the Greater Washington Board of Trade and the Montgomery and Prince George’s Chambers of Commerce, representing hundreds of businesses and employers in the region, lent their names to this effort.

The letter points out that the Purple Line is a privately-financed, shovel-ready infrastructure project that will create thousands of jobs. In addition, it is only the second public-private transit project in the United States and its cancellation “would have a powerful negative impact on the ability to attract future private infrastructure investment.”

Purple Line Now President Ralph Bennett applauds the development and business community for speaking up for this project, which has been decades in the making. “The people of Maryland have waited far too long for the Purple Line to be built, and construction would have finally begun months ago were it not for a frivolous lawsuit filed by a group of Chevy Chase opponents who misuse the legal system to advance their own narrow self interest.” Bennett adds that “businesses know that the Purple Line is an investment in our region’s future that will pay off many times over in increased incomes, property values, and quality of life.”

The Purple Line was scheduled to begin construction in the fall of 2016, but was delayed by Judge Leon days before the Federal Transit Administration was scheduled to sign a $900 million grant for the project. The MTA and its private partner, the Purple Line Transit Partners, have been continuing work on right-of-way acquisition, design, and pre-construction surveys. However, before construction can begin, the judge must rule on an updated ridership analysis submitted in December at his request and then the FTA must sign the Full Funding Grant Agreement.